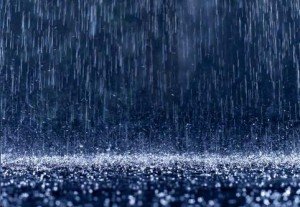 After I finished dental school, I interviewed at a yeshiva for the position of high school biology teacher.  Even though my wife was keen on me making lots of money and actually working as a dentist, I had always wanted to teach and figured that I’d fit this in somehow.  But my wife didn’t have to worry — I wasn’t offered the job and, apparently, it had to do with Aristotle.

I say this because that’s how the rosh yeshiva ended the interview — that he couldn’t hire me because I was “beholden to Aristotle,” even though I gave him the following explanation.

“If you follow my statutes and keep my commandments and you fulfill them; I will provide your rains in their proper time; the earth shall give forth its produce and the tree of the field shall yield their fruit. (Leviticus 26:3-4)

According to the Torah, then, God apparently provides rain in return for compliance with His commandments and fulfillment of his laws, and there is talk of this in the Talmud as well:

“The eyes of God are always upon the Land of Israel” (Deuteronomy 11:12) — sometimes for good and sometimes for bad.  How is it for good?  Let us say that the Jewish people were completely wicked on Rosh Hashana and it was decided that they would receive little rain.  Subsequently, the Jewish people reversed course, but it is impossible to add rains because the decree has already been made.  Rather, the Holy One Blessed is He will bring down the rains at the most opportune time on the land that needs it the most. (Bavli R”H 17b, 6th wide line)

It seems from all this that Judaism has a very mystical approach towards rain, yet, when I’d speculate that even this rosh yeshiva takes an umbrella when the weather report says to expect rain — he doesn’t mutter, “Ha! What does Dr. Joe Sobol know about God’s plan for rain.”  On second thought, maybe he does mutter this — I can’t say for sure because I never got to really know him, having never seen the guy since leaving the interview.

We know that rain comes from clouds and if you’re interested in anything more scholarly than that, you can start by checking out the Wikipedia articles on the urban heat island effect and the maximization of the upslope flow in mountainous regions.  There’s really no serious debate about this and that’s because rabbis are not threatened by clouds.  Rain comes from clouds and clouds come from condensation and rabbis are cool with that.

But talk about cosmology and evolution and some people, including many rabbis, become very uncomfortable.  Why?  Because the Torah speaks of God forming the cosmos from nothingness and man from dust.  And monkeys make people emotional.

My family ate out 2 weeks ago and the host’s 4th grade son gave a dvar Torah about how the gentiles think people came from monkeys and so it makes sense that we not respect our parents because they’re nothing but one generation closer to the monkeys, while we Jews know that we came from Abaham, Isaac and Jacob, making our elders closer to that which deserves our deep admiration and veneration.

After waiting for the kids to leave the table, I asked the host what he thinks about the things his sons learns in yeshiva and this is how it went:

He: “Was Darwin Jewish?”

He: “So he’s a gentile, and my son said that that’s what the gentiles think.  So isn’t that what they say?”

Me: “But didn’t say we came from monkeys; what he said was that we share common ancestors.”

I figured this guy’s not going to be able to appreciate the argument any further, so I stopped.  In speaking with my spiritual adviser later that afternoon, he explained to me that the real issue was that we had not been disagreeing as much as we had been looking at two different things.  While I look at patterns in the universe to figure out an explanation, this guy looks for something else, but certainly not the universe — and if we’re not going to be discussing the same things, we’re certainly not going to be able to come to any conclusion that will satisfy us both.

But you’ll be hard pressed to find anyone who denies that rain comes from clouds, even though this biblical verse clearly states that it is God who directs it to rain and not the condensation of water vapor — but monkeys, we can’t be from monkeys.  I think it’s an emotional thing.  R’ Slifkin mentions how he thinks it’s funny that people are offended if you say they’re from monkeys but being from dirt is fine.