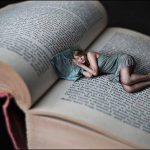 I sat alert for about ten minutes and then the rebbe started pacing, at this cue I arranged my gemara, mishna brura, notebooks and a mesilas yeshurim in a way that would hide the fact that I was dozing off. I had always sat in corners to the right side of the room and in this case there was a small pillar to block me from direct rebbe view, besides he was droning on about courtyards and public domains and things I never needed to know in real life.

I knew that some guys liked to read in shiur, there was Zev to the left of me with a comic book and he only got away with this because of the shtender he had made last year at Mogen Av, it seemed as if every camp utilized a perfectly good wood working program to make the same old shtender year after year as if there was no other use for tools then to make shtenders, sukkahs and cherry wood bookcases that every kollel guy seemed to cherish. I would go to these guys on Friday night for dinner, that itself a feat because no one ever invited me and I had to make hints as if I was trying to get a goy to turn on a light for me or something and when I finally got there we had oily shake and bake chicken, some sort of romain lettuce and empire deli meat salad and maybe some cranberry kugel which was really cake. What struck me most was how every piece of furniture was falling apart besides for these dark red bookcases. The couches were second hand, the table had a leaf missing and the chairs were borrowed, but the bookcases which weren’t really needed except to show off seforim collections because you were in yeshiva all day anyway, were in perfect shape.

Next Zev was Yanky and he was doodling, he was on this maze phase, later he would introduce me to Escher, which I think all the jinco wearing druggie dudes from Flatbush got into about the same time they discovered the laser light shows played to the Wall at the local planetarium. I myself wasn’t much into drugs, I liked the concept, I just felt pride in having never tried them. It seemed like no one ever really payed attention in shiur. Yes, there were the in-towners, ironic because they were the goyishe kids who went to NCSY and wore knitted yarmulkes. The Rabbis would tell us that they had to accept them to make the community give more money, but we weren’t allowed to eat by their houses or go to their shuls – most because of girls.

Suddenly I felt something whiz by my ear and could hear everyone laughing. Then before I knew what hit me the rebbe had smacked the table out from under me and all of my books went flying everywhere. I was jolted awake and wondering what on earth had happened. I’m sure glad the chalk that whizzed by my ear didn’t get me. I could also distinctly remember being woken up with dangling tzitzis in my ear, pouring water down my back and various other rebbe tactics that would probably qualify as abuse by today’s standards. It was all in good fun, except when it involved a kenas, then it just got plain old stupid.