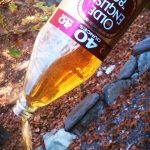 I initially laughed at what I’m about to tell you, but then I began wondering about the implications of it. There is a common practice among gang members to pour off a little of whatever drink they’re having in front of the corner store when they learn of a friend being shot or picked up by police. I believe it’s called “pouring one off for the homie”, well in San Francisco a similar custom apparently takes place at some Jewish weddings. Some folks have been pouring off a little of the wine under the chuppah for those who don’t have the right to marry yet. I have yet to confirm this minhag, but it’s funny and disturbing at the same time.

I wonder if we true believers can actually drink from that wine? If it’s non-mevushal it;s probably assur anyway, because anyone doing such a thing is probably not all that frum. But what if the wine’s mevushal, has it attained some sort of gay idol worshiping status? Or maybe it’s a good thing that we’re taking time out from our enjoyment (similar to the plate breaking to remind of us the churban) to pour one off for our prop 8 homeboys?