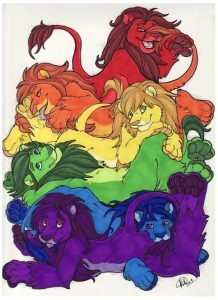 Linda Malcor has both a Master’s and a PhD in folklore and mythology, which seems fitting, seeing how easily her surname could have come straight from Harry Potter.

In 2000, Malcor self-published this article online about homosexuality, outlining her opinion of biblical references to abomination as a discussion with (the perhaps proverbial) Mr. Literal, who “insisted in the literal truth of every word in the Bible and was adamant that we cannot choose which laws we will or will not observe…[t]he Bible was the Word of God.”  Malcor makes some really good observations — and I mean that sincerely — but they just don’t hold up when arguing with the Torah observant Jew in 2012 (or even in 2000, when this piece was penned).

Malcor points to this week’s parsha for primary sourcing:”You shall not lie with a man as one lies with a woman — it is an abomination (to’eiva).” (Leviticus 18:22)

“A man who lies with a man as one lies with a woman — they have both done an abomination (to’eiva).  They shall be put to death — their blood be upon them.” (Leviticus 20:13)

To begin, Malcor decries Mr. Literal for picking and choosing which bans on abominations he will consider and which he will ignore, making a particular point about Leviticus 20:13 — apparently, it seems, Malcor doesn’t take Mr. Literal seriously because she foresees that his type is unwilling to execute the homosexual, called for by Leviticus 20:13.  From a Jewish perspective, though, it’s pretty well established that we no longer function in the judicial capacity necessary to carry out corporeal punishments, making this a contrived argument.  In the same way that Malcor wouldn’t expect Mr. Literal to assassinate the murderer or the adulterer, she shouldn’t consider him to be shirking his duties when he merely balks at the homosexual but does not hunt him down.  And if Malcor would ask the observant Jew to be consistent with Leviticus 20:13, he would — homosexual activity, according to the Torah, is deserving of death, like it or not.

Malcor counts abomination 65 times in the Old Testament — for the purposes of this post, let’s just say we’re not interested in what the New Testament has to say about this.  She then mocks Mr. Literal for being inconsistent — and I can’t really understand what she’s saying here, because from her bio, it appears as though she’s an elder and a deacon in the Presbyterian Church and a “Shalom Commission” member of Gay and Lesbians Relations for her church, and I can’t imagine that reading through all the Wikipedia articles on any of these topics can really give me enough clarity for me to perceive the subtleties and nuances with which her particular flavor of Christianity views homosexuality.  But suffice it to say that her’s is a positive attitude and that she does not take the Old Testament at is word (for whatever reason) while Torah Judaism does not take a strong stance on homosexuality, just like it does on adultery and Shabbos.  So while Brad Pitt may have no problem promising Jennifer Aniston that they’ll care for each other for as long as they both shall live and then, while still married to her, engage in an intimate relationship with Angelina Jolie (and the same for these leading ladies), that’s generally not how Torah-observant Jews operate.  Sure, there are exceptions but they speak of the flawed (or hypocritical) nature of people (who happen to be Jewish) and not of the hypocritical nature of Judaism itself.  So while Malcor takes a swipe at all those who cheat on their spouses but point fingers at homosexuals and say, “You’re going to Hell!”, that argument doesn’t hold water against the Torah-observant Jew.

Malcor then takes a lighter tone but maintains her thoughtful and pointed attack on all those who enjoy clam chowder but complain about homosexuality — and it’s a good point, l’shitasa (from her perspective), but again, it doesn’t fit for the Jews who refrain from consuming all of the creatures listed as being abominable.

She quotes Genesis 43:32 and 46:34 for their uses of the term to’eiva and to’eivas, respectively, but as livestock-worshiping idolators, that’s how the Jews would have been seen in the eyes of the Egyptians — I don’t really see what she’s trying to say here.  She quotes Proverbs, but that’s not the Torah.  Sure it’s insightful, but like Psalms, Proverbs is not a book from which we derive any direct insights into how we’re supposed to relate to God because God didn’t compose the book; it’s held in high regard and King Solomon (and any other co-authors) might be speaking from their prophetic lips here, but Malcor seems to be suggesting that there be a hekeish (comparative tie-in) made between the use of the word to’eiva in Proverbs and, again, I just don’t see her point other than just remarking that the same word is used.

Then, l’shitasa, we get to the real kicker — dietary laws.  Again, I can’t really speak about her take on this because, as a Jew, I’m an outsider to her faith.  I don’t know what she maintains as truth and what she maintains as significant.  All I can say about this is that she seems to mock Mr. Literal for not being nearly as careful about “swarming creatures in the water” (Leviticus 11:10) and eating nosar and/or piggul (Leviticus 19:6-7) doesn’t even make use of the term to’eiva, which sort of reveals the inadequacy of her argument, I thought.  I mean, at least get the words right, lady — now I have to count them all myself to see how many more she miscalculated by.  And then there’s pork and ham and bacon, which she’s assuming Mr. Literal enjoys for breakfast, lunch and dinner.  What does she say to the Mr. Literal who actually maintains a ban on all abominable things?

Then there’s her section on idolatry, on which the Torah observant Jew also maintains a strict ban, and the metaphorical usage of the term in Proverbs also makes a lot of sense, as do the bans on adultery and machzor grushaso (halachic wife swapping ala Deuteronomy 24:1-4).  Her 3rd citation there, however, from Leviticus 7:21 doesn’t actually contain the word to’eiva.

The reference to fair trade in Deuteronomy 25:13-16 fits in very nicely with how the Torah seems to be consistently defining to’eiva — things that deviate from how the Torah perceives things should proceed are seen as objectionable and abominable.  So you may disagree with the Torah and permission is granted (Avos 3:19) — but if you’re interested in following the Torah, that’s what it says.

Then she quotes bans on gender-bender attire (Deuteronomy 22:5) and esnan zona and m’chir kelev (hmm…let’s call them “funds of ill-repute, Deuteronomy 23:18) which she presumes Mr. Literal pays no attention to, but to which Torah Judaism maintains strict adherence.  Then there’s a whole list of references from Nach which we’ll skip because they’re largely irrelevant for our matters here.

She concludes that no one pays attention to any of the bans except for homosexuality, even though the term to’eiva appears by all — funny, though, how we caught her at least twice when her citation doesn’t use that word in the original Hebrew (Leviticus 7:21 and 19:6-7).   And she concludes quite abruptly there with a very tedious chart comparing translations from 6 different English versions of the Old Testament — none of which has any bearing on the issue at hand, for if we consider for just a moment the Mr. Literal who’s actually sincere about things, her argument amounts to much about nothing.

So maybe she’s a big dope — I don’t know.  What type of person gets a PhD in folklore and mythology?  I can’t say.  Or maybe she’s very intelligent but just doesn’t think straight.  Or maybe she’s actually quite astute and this was just some silly thing she wrote up and didn’t mean for it to be dissected and evaluated point-by-point.  Either way, she does make reference to Jews directly once in the article, questioning if there are any Christian, or Jewish, for that matter, congregations that slaughter animals on an alter — but again, she doesn’t really have a point.

So perhaps this is a very good argument against those who inconsistently apply the Old Testament to their daily lives.  But to Torah observant Jews, this write-up doesn’t really express any meaningful content.

Apparently, there’s a contingent of otherwise Torah observant Jews who practice homosexuality and there’s an even larger contingent of those who practice nothing because of the ban instituted in 1312 BCE at Sinai and its environs.  I don’t know what to say on the issue because I can’t imagine that something ought to be said on the issue.  People are who they are and feel what they feel and the Torah makes demands and if one is inclined to adhere to such rules they will.  I just thought it’s interesting to point out that what Mrs. Malcor thought was a piece worth writing to Mr. Literal is necessarily directed at the non-Torah observant position, which can be taken to task for being consistent to that end.

Have a good Shabbos!

49 comments for “Dvar Torah Acharei-Kedoshim: Putting Abominations Back into Perspective”