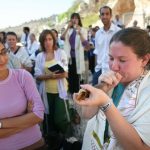 Since when have anyone who considers herself to be a bas melech cared about attending events that are for men only? Since when did frum girls and women complain about sitting on the back of the bus? When did bais yaakov girls start becoming interested in attending shul? Why are women complaining about being put down, or mistreated?

It seems to me that the culprit is feminism, but this time it’s twisted itself to sound frum. It seems as if Satan himself has figured out a way to get otherwise frum heimishe women to start thinking like feminists and it’s disgusting how far they’ve gone. Until 10 years ago, a woman’s place was in the home, we were blessed with such mitzvos as challah making, candle lighting and tending to the children – when did these things become a sin.

More and more frum girls are going to college, rachmana l’tzlan and this is polluting the heimishe community with their so called “educated values”, but we know these are not the emes of Hashem. I’m not just talking about girls from open minded families or with parents who grew up modern orthodox or conservative. I’m talking about girls from frum families in Boro Park attending college.

If women remained in the home where Hashem and Chazal have always taught they belong, we wouldn’t be having these problems. Did women demand such rights even 10 years ago? Were there riots against women? I don’t think so!

It is a mistake to sit idle and think that feminism is only for groups of Jews who are not frum, like YU, Women of the Wall and the vast majority of those closet reform Jews that call themselves Modern Orthodox. Don’t stand by and watch our daughters as they join the ranks of Blue Greenberg and Gloria Steinam, yemach sh’mo. Stay in the kitchen and tell your daughters what’s proper for a true bas melech to do.

36 comments for “Feminism is polluting the frum community”