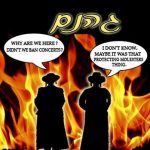 I went to Shul in Ditmas Park (near Flatbush) this past shabbos and the related over a horrible story about a 15 year old bais yaakov girl led astray by her friend who pointed her to an unmentionable website. Her mother logged on the computer and had found that her daughter had visited the unmentionable website, not ever learning what the website was – we all speculated whether it was Facebook or some actual pornographic site, but we never learned the name. We only learned that the dangers of the Internet affect all of klal yisroel and that we need to do something about it. The Rabbi compared the internet to gun control and how you can’t just let anyone have a gun, interesting because most frummies are extremely anti-gun control.

So of course, me being the seeker of truth, I approached the rabbi after shul and asked him to explain the following conundrum I had. If the internet was a danger to all of Klal Yisroel, why was half the population not invited? I had just learned through an ad in the Flatbush Jewish Journal that the event was for Men Only, but the Rabbi fumbled around with answers. He offered me the lame “the gedolim must have had a good reason not to invite the women” and “there must be a problem with seating”. You mean to tell me they couldn’t figure out separate seating for an event at a 43,000 person stadium, I countered.

I should also mention that none other than Yeshiva Net, a frum web filter company – is the one responsible for putting on the forum and that for two hours before the “gathering” there will be an expo filled with internet filter products and such. It kind of reminds me of those studies sponsored by the Dairy Farmers of America that like to tell me how good milk is for me.

If you search around the web, there are a lot of people commenting on the Internet Asifa, many are blasting it and those supporting it are usually in the form of “we must follow what daas torah says, because they are like the sons of God”. I wish these sons of God would give as much time to child abuse, white collar chillul hashems and agunot as they would to preventing men from looking at something they will look at no matter what you say.

Typically, those who use the term klal yisroel are only concerning a very small population of Jews, predominantly those who wear black hats of some sort. Chabad, anyone associated with Yeshiva University and women are not included in Klal Yisroel. Modern Orthodox is also not included and since Reform and Conservative Jews aren’t as Jewish as Klal Yisroel they aren’t included either. This means, that the second anything says klal yisroel, most folks reading this website can assume it doesn’t pertain to them. Besides, you have all been polluted by the dangers of the internet and are on a one way ticket to hell anyway.

← Chinuch Roundtable: Is it worse to talk to girls online or in person?
With all due respect, Gedolei Yisroel, YOU are a greater danger to children than the Internet. →

46 comments for “Is the Internet Asifa a scam?”