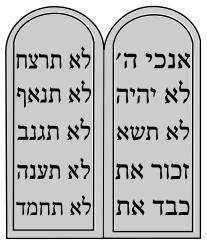 The notion of there being ten commandments — that is, the Ten Commandments — permeates Judeo-Christian religious philosophy, despite the fact that the Old Testament is, for the most part, full of many more directives.  In addition to the Jewish opinion that, like the rest of the laws of the Old Testament, these Ten Commandments do not apply to gentiles, we also maintain a fair degree of ambivalence when it comes to declaring a special status for these ten commandments for Jews themselves.

Maimonides ruled that “the entire Torah given via Moses, our master, may he rest in peace, is from on high in its entirety…and there is no distinction to be made between the verses — so that “v’Timna haisa pilegesh” (“And Timna was a concubine,” Genesis 36:12, a seemingly superfluous, unimportant comment) and “anochi Hashem Elokecha” (“I am the Lord your God,” Exodus 20:2, the opening line of the Ten Commandments, a seemingly monumentally consequential comment) are equally as impressive and holy.

It was for this reason that Maimonides faults those whose custom it is to stand during the recitation of the Ten Commandments during the Torah reading, for one who does so shows that what he or she is now listening to deserves a greater degree of veneration than what came before and what is to come later.  This approach is grounded in the Akivan perspective of Torah min hashamayim (lit. “Torah from Heaven”) — that even the very crowns of the letters of the Torah offer mounds and mounds of legal, ethical and ritual derivation.  The Torah, perfect and true and particularly extraordinary in all of its facets, is not to be gerrymandered into that which is substantially meaningful and that which is not, and certainly not by humans who only their intellectual yardstick with which to measure things.

R’ Ishmael, on the other hand, placed boundaries on the exegetical potential of the verses themselves and the manner in which they appear.  This word appears here, he’d maintain, because that’s the manner in which humans speak…and those two verses appear adjacent to one another for no reason that can be described as profound, and so it would be wrong to misconstrue a lesson from their textual proximity.  And it is therefore quite appropriate that it was the School of R’ Ishmael that asked, “Why were the Ten Commandments not placed first in the Torah?’  For the Akivan, this question would be odd, for with equal footing given to all verses, it would make just as much sense to ask, “Why were the verses related to Timna not placed first?”

But the question was asked, and Maimonides did attempt to quash what he referred to as the sectarian practice of standing during some portions of the Torah reading and not others — suggesting that such a notion does exist, despite the ever popular pseudo-mainstream-ity of the Akivan view that the entire Torah is on equal footing in respect to magnitude of importance and level of divine inspiration.

It is thus interesting to note that R’ Eliezer ben Hurcanus, the rebbe of R’ Akiva, was asked by King Agrippa: “If circumcision is such a beloved commandment, why is it not included in the Ten Commandments at the giving of the Torah?”, thus presupposing that the Ten Commandments hold a unique significance over that of the rest of the commandments found in the Old Testament.

Perhaps, though, from a purely philosophical perspective, it was not included so that a physical distinction remained between Jew and gentile even when the latter decides to apply the Ten Commandments to himself.