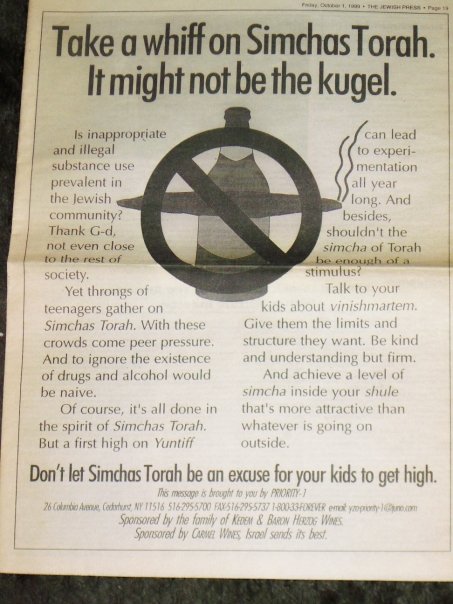 I don’t really want to get on my high horse, but I’m not sure that anyone reads Frum Satire for the ads. I do get complaints about the random google ad showing Jews for Jesus stuff or the Muslim Dating site not being tznius enough, but you can pretty much assume that most readers are coming here for the amazing, thought provoking and sometimes smile making content. Unfortunately the same can’t be said of most periodicals.

When it comes to reading material like Mishpacha, Binah, Yated and Jewish Press – the ads are almost always better than the actual content. The Yated has exactly 3 articles worth reading, those being the chinuch roundtable (coming soon to Frum Satire) the readers bitch about everyone not being frum enough section and the gadol/rebbe worship paparazzi pages. Mishpacha always has some shidduch gripe thing worth making fun of and I’ll admit that I’m a sucker for their fictional gadol propaganda biographies, but the ads for revolutionary bug checking devices and tznius swimwear are always far more interesting. The Jewish Press, while having shrunk in recent years can always be counting on giving us some controversial front page article on being gay, off the derech or an older single every few months and I’ll admit to reading those Esther Yungreis articles every now and then.

Of course The Jewish Press has interesting ads because their audience is sub 35 year old right wing borderline black hat modern people who are frummer than their parents and 75 year old right wing nutjobs who grew up yeshivish and want us to go back to the days when gedolim knew more than how to make chumras and bans. That being the case, there are ads for sexy sheitles and really expensive dinners, along with all the regular frummy concerts, chol hamoid fairs and schools that cater to small classes sizes and at risk children.

So interesting and funny are frum advertisements that in many major frum communities they have newspapers with no content at all and just advertisements. In New York they have frummy ad papers with some lame humor written by women that rings readers digest rejects and there is also something called the Five Towns Jewish Times which is a newspaper with about 10% reading and 90% advertisements. Of course the 5TJT as it’s known in some circles has almost all the same ads as the Jewish Press and Yated, but it’s free, so you might as well save your dough and get it instead. Or just read it when you’re waiting for your pizza, which is how most people know what it is.

← Does your community have a breakaway shul?
Footage from my first time on stage →

10 comments for “Most people read frum periodicals for the ads”