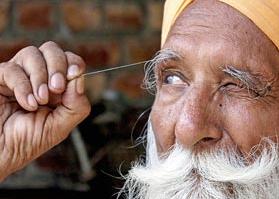 Imagine the most awesome and splendid of occasions accompanied by the most fabulous and incredible fanfare and it would approximate the scene that was when Moses had nearly completed the week-long introductory period of the Mishkan (Tabernacle).  Before this preliminary phase had finished, though, tragedy hit: Nadav and Avihu, the two eldest sons of Aaron, were struck down by a divine decree while in the Mishkan (Leviticus 10:1-2).

Opinions abound as to the events leading up to their death.  Based on a very straightforward explanation of the text, we often learn in 3rd grade that the sin was that they brought the wrong fire — but was that really deserving of death?  Throughout the entire Tanach, we come across very few people who ‘merit’ such an immediate and direct death through miraculous intervention — what was it exactly that Aaron’s sons did that made it necessary for God to react in such a striking fashion?

Tying these early verses of chapter 10 into those at the end of chapter 9, Rashbam (grandson of Rashi) explains that they brought the wrong fire but that it was due to their lack of sensitivity towards taking the opportunity to glorify God’s name, much like the great violation of Moses, for which he was barred from entering the Transjordan (Numbers 20:7-12).   Rashbam explains that the first offering of the day was the incense and that while for each of the first 7 days of the introductory period of the Mishkan, a flame was brought manually to serve as the source of fire upon the alter, the fire for the eighth day was to be different in that it was to come from heaven.  Although it happened much later in history and so comparison might seem mystically anachronistic, Rashbam draws a parallel to the incident of Elijah upon Mouth Carmel (I Kings 18:19-39) in which God’s glory was manifested publicly by the arrival of a divine fire.  Rashbam explains the events of Leviticus 10:1 as having occurred prior to Leviticus 9:24 — Aaron’s sons did not allow God’s name to be glorified in a befitting manner and so the exact same terminology is used in both verses “vateitzei aish m’lifnei Hashem vatochal…” — to refer to “a [single] fire [that] came from the Almighty and consumed” both the offering on the alter (9:24) and the sons of Aaron (10:2).

The Ba’al HaTurim (mentioning it at Leviticus 6:5) explains the sin as having undermined Moses’ teachings.  The verse there speaks of the biblical requirement to feed the fire despite it being supplied by divine origin — related dispute as to how many pyres were upon the alter, such that perhaps different fires were fueled by different sources — and Aaron’s sons chose to decipher the meaning of the various written laws and oral instructions themselves rather than defer to Moses, their teacher.

The Sforno takes an entirely different approach, claiming that Nadav and Avihu sought to capitalize on the newness of the divine presence by doing an entirely new thing — sacrificing a completely unprecedented and unprescribed incense offering — that, ultimately similar to position taken by Ba’al HaTurim, was not what Moses had instructed them to do.  But what consumed them was a fire emanating from the golden alter from within the Mishkan, not the one and the same fire that descended to consume the offering on the copper alter in the courtyard as explained by Rashbam.

The question is, though, what sort of punishment is this?  According to the Ba’al HaTurim, drunkenness was a factor, in addition to what he calls 5 other distinct (yet somewhat overlapping) violations, but unlike Rashi and the Sforno, no mention is made about the level of Nadav and Avihu’s piety.

Rashi quotes the Sifra d’Millui’m as explaining that Moses comforted Aaron by relating that God had told him that there would be those through whom a sanctification would occur and seeing how his sons perished in a divine fire, it must have been that they (Nadav and Avihu) were greater (than Moses and Aaron).  Similarly, the Sforno refers to Nadav and Avihu as “two tremendous righteous people.”  But neither Rashbam nor Rashi maintain that they were drunk — the latter merely quotes R’ Ishmael, who explains as such.

What this amounts to is a divide along the Akivan/Ishmaelian fault line.  The mystical Akivan stance, echoed by Rashi and Rashbam, promotes the talmudic equivalent of Obama-esque socialism:

Suggesting a play on words, the talmud (Bavli Yevamos 121b) explains this verse as referring to the righteous (s’vivav, those who surround and are in intimate recess with God) and how He reckons all minutiae with His righteous ones down to a hair’s breadth (k’chut ha’sa’ara, from nisara).  Nadav and Avihu were righteous (and perhaps supremely so, as Rashi states in his comment to Leviticus 10:3, d”h hu asher dibeir) but, as humans, erred, and so had to pay the ultimate price because similar to the Democrat’s message of “more from those who have more,” the saintly are judged on such an absurdly high level that even the most slightest disturbance in spiritual equilibrium can have a colossal impact, and so, much like what happens to Moses later on, failing to recognize the potential for a great sanctification of the divine name ends up as Nadav and Avihu’s fatal error.

And according to the Sforno, too, who says that Nadav and Avihu were attempting to greet the incoming divine presence with loving spontaneity in the form of an additional incense offering, explains that they perished in an instant because their level was of such refinement that this action, however intended, was deemed recklessly uncalculated and worthy of the ultimate punishment.

According to the Ba’al HaTurim, though, Nadav and Avihu were guilty of 6 violations and are not described as men of anything more than average piety.  In line with the Ishmaelian perspective, the Ba’al HaTurim appears to side with those who were referred to as Dorshei Reshumos — those anonymous sages who sought to solve the enigmatic — who explain that people are judged on the majority of their deeds as explained in the talmud (Bavli RH 16b):

“There are 3 types of people who are judged on Rosh HaShana: the fully wicked, the fully righteous and the moderates.”  And who are the people in these categories?  Rashi explains that resha’im g’murim (fully wicked) refers to those who have “mostly transgressions,” while those who are called beinonim (moderates) are “half against half,” and we can extrapolate from there that tzadikim g’murim (fully righteous) refers to those who have “mostly merits.”

We are thus bidden to rest not on our laurels but to consider it as though we are hanging in the balance, as a moderate, such that any additional positive or negative achievement will swing us completely in that respective direction, in line with the Ishmaelian view that God deals with us charitably and does not reckon all minutiae down to the most subtle infractions.  But for Nadav and Avihu, who according to the Ba’al HaTurim, racked up quite a list of serious transgressions including working by themselves without not seeking guidance from Moses, appearing in the Mishkan while drunk and (perhaps in general) chasing after financial gain in relation to the priesthood and not having children (which, to be fair, must be referring to an active role they had in avoiding offspring).  This creates a picture of Nadav and Avihu not as the sterling characters painted by Rashi and the Sforno —  making them more similar to Chofni and Pinchas than to Moses and Aaron!  It is no wonder, then, that when they acted out in this most egregious manner in public display at the opening ceremonies of the Mishkan that God struck them down — for they were hardly even beinonim.

Check out more about R’ Akiva and R’ Ishmael at 4Torah.com.