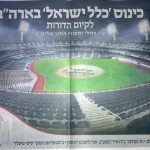 If the gedolim had only known that their attempts at taming the beast known as the internet would have been futile, I’m sure they may have gone about it a different way. For years they tried to ban, filter and try as hard as they can to exert their control over their flocks to no avail. Those documents that many yeshivos demanded parents sign claiming they had no internet, were signed and then disregarded. Unlike television, the internet could be hidden and the gedolim couldn’t do a damned thing about it. So like any beaten man does, they’ve decided to hold a big extravaganza at Citi Field to inform people about the dangers of the internet. I imagine they had a similar event when they realized the mesorah of horse and buggies like they used in the shtetl was going to be replaced by cars. Why anyone needs to spend a whole boatload of money on a conference at a baseball stadium about the dangers of the internet is beyond me, but I’m pretty sure it has to do with two things. Porn and the transparency that now exists in the frum community with regards to different beliefs, sex abuse, agunot, fraud and a slew of other things which frum people don’t want anyone else knowing about and frequently shout chillul Hashem at whoever happens to be announcing these things to the world.

So on May 20th thousands of frummies will gather at Citi Field to discuss the dangers of the internet. I like it, only because it’s completely absurd. I just wonder what more could be said, are these Rabbis going to discuss anything new. We all know that people are using their cell phones on shabbos, using their phones to watch TV and Porn and using the internet to look at things which go against the message of the gedolim (be a silent sheep and shut your mind to anything that may open it) What good can come out of a public meeting of a bunch of people discussing dangers which everyone know exist. If anything they should use this event to highlight the greater good of the internet.