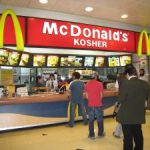 I was talking to a friend of mine the other day who got into a graduate program far from any major Jewish community. He calls me up ranting and raving about how the only Jews in his town aren’t even real Jews because they’re reconstructionists. I found this odd, coming from a person who keeps nothing in the way of Judaism and doesn’t believe in God. He then went onto say that he already called up the two closest chabads and already has an in on the frum politics of the area. Apparently the kollel 100 miles away, doesn’t like chabad, even though there are like 10 Jews in the entire state. Anyway, he’s what I would call someone who’s frum and off the derech.

You wash hamotzi before eating a cheeseburger

You still don’t hold of the Flatbush eruv

You don’t call your off the derech friends on shabbos

You still think the Rebbe is moshiach

You think Sizzler is even too goyishe for you

If someone asks you to turn a light on for them on shabbos, you rail into them mussar style

You pasken for your friends

You have never cooked a kid in it’s mothers milk

You always bring your tefillin on vacation, yet haven’t took them out in years

You won’t step foot into a Reform sanctuary

You feel it’s morally ok to rip off goyim, but not Yidden

You’ve declared yourself an atheist, but haven’t gotten around to taking the mezuzos off in your apartment

You may eat bread on pesach, but you don’t eat gebrokts

You still eat “by” people’s houses

You dream of gourmet gefilte fish pop up places

You think that tznius is hot

You don’t eat kitnyot on pesach

Shiksas are still only for practice

Modern orthodoxy is such BS to you

If someone Jewish texts you on shabbos, you text back and say call me after shabbos

You still ask for mezonos rolls, even in treife places

When the stripper finishes her lap dance you say “shkoyach”

You ask girls on Jdate to confirm their yichus

You don’t hold of non-orthodox conversions

You still don’t hold of the Flatbush Eruv