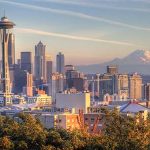 Usually when I abandon the blog for a week I announce it, but this time it just sorta happened. I was working my butt off up until the Wednesday before Pesach and I literally hopped out of work, dumped my camping gear, rain gear, some shabbos clothes which most would call weekday clothing and my bike into the old car and flew off to the Northwest. The only goal was to get out of Dodge before rush hour. I did it, flew up north towards the Oregon-California border, blasting country music and slowly lifting myself out of the work mode that I had been in. At about 6:30pm that same night I hopped out of my car for a little mountain bike ride around the shores of Shasta Lake and then kept driving until I found a nice dark roadside spot to sleep overnight in my car.

The next thing I knew, it was chol hamoid and I was wandering around Oregon and Washington with my fiance and not really noticing that I hadn’t blogged in quite a few days. In fact, while visiting with #1 commenter A. Nuran and his wife in Oregon I was informed that the devar Torah had touched a raw nerve and everyone was taking a poop on poor old D. Rosenbach. I also found out through a NY Post link that someone was going to be doing a reality show called “shunned” about off the derech Chassidim and it was going to be starring Pearl Perry Reich. I was also informed that the Groggers were on Fox News, because of the nose job fiasco.

But I was with my lady and my mountain bike and I couldn’t really be bothered. I did take a day to wander around Seattle  and I approve it, like I would totally move there, it’s completely awesome and cheaper than the Bay Area. I also hit up two very cool mountain bike parks, Black Rock and Duthie Hill. Check out the vids below.

10 comments for “Dude where the heck were you?”