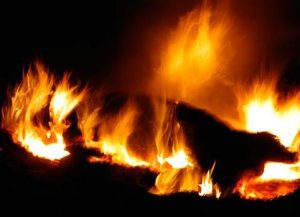 R’ Ishmael takes the phrase rei’ach nicho’ach, “a pleasant fragrance” — which shows up 4 times in this week’s parsha (Leviticus 6:8, 6:14, 8:21, 8:28) and 8 times in last week’s (Leviticus 1:9, 1:13, 1:17, 2:2, 2:9, 2:12, 3:5, 3:16) — to refer to something spiritual, for God has neither nose nor sense of smell nor the desire to experience one olfactory experience over another, such that one can be said to be pleasant to the exclusion of others less pleasant.  In other words, the entire thing makes no sense if one describes a divine experience it in human terms and takes it to mean something similar to a human experience — it was written in this poetic and quaint fashion because we are mortal and that’s how mortals seem to experience it.

R’ Akiva balks at this allegorization and took it literally.  As explained by the Mechilta of R’ Shimon bar Yochai (his star pupil), the one true God is superior to the fake gods of the idolators.  We will proclaim next week in the Hallel during Passover, “af lahem v’lo yerichun” — “their gods have noses but cannot smell” (Psalms 115:6) but the One Who by His word created the world it is not so, for “vayurach Hashem es rei’ach hanicho’ach” — “God smelled the pleasant fragrance [of Noah’s sacrificial offering upon his exit from the ark].” (Genesis 8:21)

Rashi takes a step back from his usual embrace of the irrational and states that the aroma is pleasant insofar as it represents Israel’s fulfillment of the word of God, as though God would refer to the stench of wood glue as pleasant had he instead commanded us to build model airplanes.  The commentary of the Leket Bohir echoes this sentiment, remarking how the smoke of burning flesh is hardly pleasing to our noses, so how could it possibly be pleasing to the Almighty?  I thought this a bit odd because it not only assumes that God necessarily enjoys aromas like people do and therefor must find something distasteful if we do, but it also appears to be in direct contradiction to the Talmud (Bavli Zvachim 46b, fifth narrow line from the bottom) where it explicitly states that sacrificial meat must not be pre-roasted prior to burning it on the alter so that the burning flesh produces a nice aroma.  The Sifsei Chachamim agrees with Rashis assessment that the textual reference to God enjoying the aroma is not to be taken as meaning anything related to a physical pleasure, for God already has access to everything and doesn’t need us to prepare dinner for Him — “If I were hungry I would not tell you because the world is mine and everything in it.” (Psalms 50:12)

A potential problem with this explanation of R’ Ishmael, carried forward by Rashi and a number of other commentators, is that the first reference to the ritual burning of sacrificial meat (as mentioned by Shimon bar Yochai above) is in regards to Noah’s sacrifices upon exiting the ark — what sort of pleasantness can there be in relation to fulfillment of the commandments in respect to Noah slaughtering voluntary sacrifices that were not commanded?  Perhaps this is explained as a foreshadowing of sorts.

Unrelated to this question, Nachmanides wonders how R’ Ishmael can claim that all of the sacrifices were only to deter the nation from foreign worship when there was so much meaning instilled in the various aspects of the ritual rites of sacrifice — the kidneys were offered as a sign of our adulterated drive and desire and the legs were offered as a sign of our misguided alacrity in sinfulness.  In a sense, he continues, the sacrifice enacts a form of metaphysical switcheroo; as R’ Becher is apt to explain, the offering was necessarily made with the purposeful emotional attitude of “there go I but for the grace of God!”  But I find this all very cyclical, for it was only because sacrifice was a sign of the times and inherent in the psyche of the people that R’ Ishmael suggests that it was instituted as a proper service to God and once God was to construct the framework of sacrificial rites did He made it just as technical and precise as the rest of the obligations and prohibitions of the Torah.  In that vein, it was appropriate to parallel the animal’s death with the intended motivation of getting us to recognize our own mortality, frailty and proclivity for deviation from God’s will, and it didn’t really matter that the kidneys have nothing to do with thoughtfulness because the meaning was not in the reality but in the people’s perception of the reality.

So if God needs not, why require us to do anything then?  In response to this, R’ Ishmael answers very appropriately when he explains that God’s only desire, so to speak, is for us to grow, develop, succeed and achieve our goals.  In this sense, God lacks nothing but still asks much.

For more on the meaning of the sacrifices, see 4torah.com.