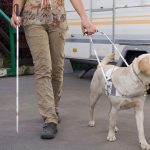 The following story is from a shiur given by Rabbi Zecharia Wallerstein.

There was once a young lady who was blind and she was looking for a shidduch. As a blind girl, it was very tough for her. Eventually, she was set up with a boy who fell madly in love with her, and he married her and he took very good care of her.
One day he was listening to the radio and he heard that there was a doctor in the United States that dealt with blind people – this doctor performed eye transplants. The man researched it and he got himself on a list for an eye transplant for his beautiful Chana. The only problem was that there was a twenty year wait. He saw his wife was very broken.

A month later, the man runs into the house exclaiming, “Chanela! Its a miracle – You’re next! They found a donor for you!” She didn’t ask how he did it or what he did, but she knew she was going to get eyes.

The day before the operation, as the eager couple sat in the hospital room, the man turned to his wife and said. “Chana, I have to tell you something. Not only are you blind, I’m also blind. I never wanted you to know that because I never wanted you to pity me. However, I thought I should tell you now so that you won’t be shocked once you get your sight.” Chana started crying.

The next day Chana received her eye transplant, and it worked. Her eyes slowly began to heal until finally she was able to see more and more and more. For the first time in her life she saw light, colors, and people. Once she saw that her husband was in fact blind, she told herself that after all those years of being taken care of, she would now take care of him.

Or at least that’s how she thought it work. In her eagerness to see the world and experience all of the things she had never been able to do before, she began to develop resentment for her blind husband who could not participate. Eventually the marriage began to dissolve.

She didn’t have the hear tot tell him in person, so she called him one day. “Chaim, it’s just not working. I can’t live with you anymore … I want a divorce.” Chaim was shocked. “I’m sorry Chaim, but I want to see the world and I can’t do that with you.”

Chaim sadly agreed to pack up and leave. “I”ll be out by tonight,” he murmured.
When she came home that night, she saw a letter on her bed that her husband had left her. She carefully opened the letter – “Dear Chana, I really and truly love you and I’ve always loved you. I respect your decision to leave me… but I have one big favor to ask you. Take care of those eyes, because not long ago they were mine.”

Hashem gave us a transplant – He gave us His neshama. But all too often we forget this. What do we do with this holy soul? We tell Hashem “Thank you, the soul is great!

But I have to see the world, I have to be busy with everything else but You.”

Never forget that Hashem gave us our “eyes” – and he expects us to use them wisely, to serve Him lovingly and sincerely, to care for our fellow yidden, and to reach our unique potentials.

← Best ways to make someone think you’re an obnoxious frummy from NY
Intermarriage blows, but this video sucks even more! →

39 comments for “Our lives are on loan from God”