I miss those families that have erev shabbos kugel, I find this kind of weird because I’ve never really missed frummies 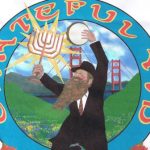 before, but I guess human nature is that we miss the things we don’t have. To say that San Francisco is the black hole of Judaism may be a little much, sure there’s rampant assimilation and you can even find shomer shabbos people who support a ban on bris milah, but what San Francisco and the Bay Area itself is missing, is regular old frum people. Both of the black hat and the modern orthodox variety.

I find it kind of hard to believe what I’m about to say, but I miss those nosy shietle macher type of yenta women who wear shabbos robes all week and always try to set you up with their third cousin who they never met. I miss those frummy dudes who never go on the internet and always click their tongues and rub their hands along their thighs before they say something and it always has to do with mussar or something. I miss regular old modern orthodox families where the women don’t say hamotzi and there’s no talk of feminism. I miss sitting at a table where there are only people who grew up frum.

If not for Palo Alto and San Jose I may have succumbed to the lack of frummies and abandoned ship already. Sure, I don’t miss these things during the week much, but when it comes time for shabbos I really prefer right wing shuls. I miss Rabbi speeches that are purely Torah based and not always about current events, I miss going to shul and not having to say good shabbos to everyone or wait in line peacefully for someone to serve me terrible cholent.

There is something to say for the several formerly frum, now sort of modern folks who grew up yeshiva situations. They are few and far between, but without them I would seek further into my stupor of missing east coast frumkeit, the social kind. Not including chabad I think there are less than 20 black hatters in the entire Bay Area.

San Francisco has 2 black hatters, but they don’t always wear their hats. Palo Alto must have something like 10, but half of them are the kollel guys and JSN and Sam Jose has 4 black hatters. That’s dismal, there are more shietles, but still the results are paltry. There are two sheitle machers, one tongue clicker, a couple peyos behind the ear peeps and not one person who has a chassidishe accent – even Portland has some real chassidim. There is one women who makes heimishe baked goods and sells them erev shabbos, I heard of someone selling stockings out of their house too and there are even a few women without jobs…it’s still not enough.