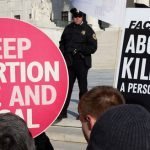 (Brooklyn, NY) An unprecedented call-to-action has been issued from leading Rabbis, community activists and matchmakers:

For the last couple decades, the Orthodox communities have been in the grip of what some call “the terrifying Shidduch crisis”; some young women are,  Gods help us, being forced to wait until their mid-to-late 20s before someone pities them enough to marry them. Men, [OK, boys,] are given preferential treatment in the Shidduch system, despite their being fewer in number and more likely to leave the flock. “At first we tried fixing the obvious flaws and misogyny in the system,” said a matchmaker who identified herself only as Yente, “boy, was that a waste of time. This new idea sidesteps the problem quite nicely.”

For the first time in history, Orthodox Rabbis are permitting—nay, encouraging— the termination of female fetus’.

“Abortion has always been absolutely forbidden, you know?” Said Rabbi Yehuda Levin, “but we figured if we’re going to put up with, tolerate and protect child molesters, why not allow abortion?” Nervously twisting his beard between dirty fingers and long fingernails, he leaned in and whispered “less kids means less victims, right?” Nobody informed him that he has to tell the reporter whether a statement is off the record.

Surprisingly, there has been little negative reaction from the Orthodox communities. “Well, if the Rabbis, you know, are saying that it’s OK, we should listen, right?” Said one Kolel student who refused to give his name or make eye contact with the reporter. Women are offering little objection either. “Not as if they’d listen to our opinions,” grumbled Chanie, a flustered mother of five, “I can’t imagine going through another pregnancy, I’ll just tell him it’s a girl.”

Calls for comment at the home and office of the Skevere Rebbe were not immediately answered, though we did hear fire alarms in the background.

32 comments for “How To Fix the Shidduch Crisis: Abort Female Babies”