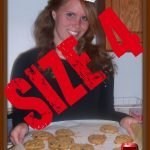 Why is it that the only frum girls that any frum guys ever talk about being attractive are chabad girls? Have you ever wondered about this phenomena? Have you ever wondered why there’s no shidduch crisis in the Lubavitcher world? Could it be that the attractiveness of the girls has a direct correlation on the lack of single girls in their community? Don’t get all crazy on me just yet, I’m only admitting these very scary premonitions after reading a very serious Jewish Press article on the subject of ugly girls causing their own shidduch crisis in the yeshivish community.

The author of the piece talks about a new amazing initiative where the mothers of boys meet potential matches for their sons. This is because the yeshivish community puts tznius before anything and how tznius would it be for boys to actually meet the potential mates prior to the mother in law screening process. The author of the article speaks about her son being a “great” boy, hard to believe because he’s still single and this woman is actually attending an event obviously geared towards the mothers of less than great boys. Still, she attends and finds a dismal level of hotness among the girls. She wanted to shake them and tell them to put on makeup, push up bras and to comb their hair.

Of course, the commenters are going crazy, but she does have a point that is seldom talked about in the frum world. Frum girls are just plain old ugly, there’s no escaping it, why do you think so many more guys than girls go off the derech? Why do you think hot chanies are never that hot? Why do you think anyone in their sane state of mind would shell out a months salary for a hair piece that is supposed to make them look 20 years younger?

Now I have no idea what to do about the lack of hotness in the frum world…is there really anything we can do? Chabad girls are known as untznius, but many have ascertained that it’s just jealousy over the fact that there aren’t many single chabad girls over the age of 22 (that’s considered old my most standards besides modern orthodox where the old age level is raised to 27)

I’m not sure that I would take it to the extreme by agreeing with the author who suggested cosmetic surgery, but her point is clear – get hot, or stay single…because all the girls over 22 are ugly.

← A woman’s place in frum society
Overweight shidduch dating site: Why not? →