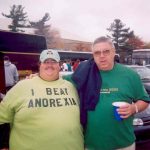 Before you crucify me, I’m actually being serious here. I saw someone on facebook had shared overweightdate.com and wondered when such a site would be created for frum people. It seems like all the dating sites geared towards the Orthodox Jewish singles community are devoted to the entire community, rather than one segment. When I was single I always wished there was a site for outdoors people or folks into toilet humor. Lets face it, people do care a bit much about weight.

What may be considered over weight is debatable, but whenever I want to set people up, I always ask if they care how skinny or large the person is. Girls sometimes like large guys, but seldom do I meet a guy willing to date a larger girl – so I’m sure there must be an exasperated shidduch crisis within the chubby and large frum singles community. Especially after my satire piece from earlier in the day where we see people caring so much about the need for makeup, I imagine that the obesity problem in the US is no less in the frum community than elsewhere.

I also know that for reason, the bigger the couple the better the marriage. I’ve witnessed it countless times, bigger people  seem happier together than the rest of population. Luckily there is plenty of intermarriage between the weights and it seems that those couples are also quite satisfied with each other. The hot couples always seem out of whack.

I also imagine that there are thin folks who may be looking for someone with “more” middos, that’s the tznius way of saying heavier….so why not create a frum version of overweight date?

40 comments for “Overweight shidduch dating site: Why not?”