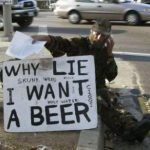 I was walking quickly down Pico Boulevard in LA this past Friday for a lunch date with Rabbi and confidant Eliyahu Fink when I happened upon a middle aged man with a card board sign that read “tzedakah”, I stopped, pulled out my wallet and gave him all seven singles inside and thanked him for showing up just when I felt like I needed to help some peeps out with money. He looked at me with an odd look and in my excitement I gave him a little rant about the deal with many organizations taking out administrative fees and even though this is halachically allowed it bugs the heck out of me and that giving directly to the person was my kind of gig.

“You must not be from around here” he immediately said and when I responded that I was from San Francisco he told me that he’s heard that us San Franciscan’s are quite the giving bunch. I told him that the homeless and poor flocked to SF because it was friendly and that it was one of those places where citizens actually befriended the homeless instead of looking away to avoid their gaze, then I went to lunch.

After lunch, I was walking to down the block and came across this same homeless guy and another homeless man who was clearly mentally ill, he said he needed $14 for a hotel room and although my homeless guy from before lunch said he had bad vibes – I went into Walgreens and took out a bunch of money to give to both of these fellows. Crazy man gave me some bracha’s and proceeded to get on the phone with my fiance when she called and granted some more blessings. I’ll take any blessings I can get, but of course I was later told that I was just hustled for drug money – in my mind I wasn’t hustled. Generally I try to give food or money to every person I come across if I’m able. This man, although slightly doped up also deserved my kindness. I guess my thought was that I couldn’t predict or care less what the man was going to do with the money, for me it was an act of giving and hopefully the man felt a little less embarrassed or a little better about himself because someone treated him with kindness.

After the crazy guy left, the same homeless guy from before and I had a long chat about all sorts of things. I immediately noticed that people were giving me odd looks for actually hanging around with the homeless folks. I also noticed that people would do all sorts of things not to have to look at the guy, it just seems kind of odd to watch supposedly religious Jews walk by and not even acknowledge a fellow human being. The guy is a pretty smart fellow and wasn’t smelly or offensive at all. Just someone down on their luck, yet not one person for the 2 hours I spoke to this man gave him the dignity of a smile, good shabbos or good luck.

It’s interesting, because the last time I was in LA I also hung out with some poor homeless Jewish dude and my heart was hurting the whole time, not only for his predicament, but for the shame these people suffer because no one will even look them in the eye or give a smile. It doesn’t take much…

We got to talking about writing and he mentioned that he has a lot of biographical notes on his life as a beggar, he used the term collector, but I’m not sure it fits. He told me of a non-Jewish bus driver who gave him $700 and of a frum man in Chicago who drove him to NY for free. He also mentioned that the nicest most giving Jewish community he ever visited was Cleveland. I told him that the poorer the people, the more they are willing to give. I myself don’t have much money at all and I gave a away almost a day’s earnings to these folks.

I usually keep leftovers in my car to give to folks standing at off ramps with hungry signs and lately I have been feeling odd at the thought of giving to people who really don’t need money. Not sure why, but it struck me after the latest robbery I experienced that giving to and getting to know and befriend poor folks or people down on their luck was a great way to gaining better understanding of self and appreciating the blessings of life.

The guy admitted to me that most of the time he would rather a smile than a couple bucks, that the shame and embarrassment at having to take handouts is worse than sleeping outside or having to take showers at the college gym. He did refuse to take anything I offered him that was from Trader Joes, he boycotts any anti-Israel companies. I found that interesting, I don’t have such strong opinions and of course this guy was pretty right wing in general, also interesting.

The only response I could figure on when he asked me about why people in LA were so mean to him, was that the wealthier you are (LA seems to have a lot of money) the less you realize that everything is from God and that givi9ng tzedakah was then reduced to fancy fundraisers and Chinese auctions and other ways to give without dealing with the people you are giving to. I think that poverty is one of those things that makes people uncomfortable and that instead of being non-judgmental they approach it with the “get a job” line which is one of the worst things you can say to a homeless person.

26 comments for “Hangin’ with the Jewish homeless of LA”