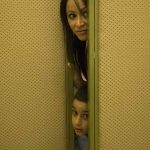 Charedi Rabbis in Israel, backed by Agudath Israel have decided that certain restaurants without mechitza’s who serve women should lose their hashgacha. Warm Eating, is at the center of the controversy. Not only do they not have a mechitza in their restaurant, but they even have female servers, which actually interact with male customers whom they are not married to. “Put it this way, we don’t let women into funerals, they must sit separately at every family event, yet when they are casually even frivolously eating with strangers – how can we allow such pritzus and mingling to take place?” In fact many restaurants in Charedi neighborhoods are known to have separate hours for men and women and if they don’t they always have a mechitza or ban women entirely.

When asking around we found that most Charedim were in complete support of such regulations. Many women were uncomfortable at being served by a man and visa versa. Some say the service is so bad in Charedi establishments because the sexes don’t know how to interact with each other and you can’t exactly spit on women in a restaurant because they aren’t wearing something tznius. Obviously, the women going into such establishments know what to wear, in order to avoid flying spittle and other objects, but not everyone knows the halacha.

Many restaurants have complied with the order so far, but some of them are holding out, such as Warm Eating which is a chain located outside of a Charedi neighborhood, which not only has no mechitza or separate hours for men and women – they even have female servers.