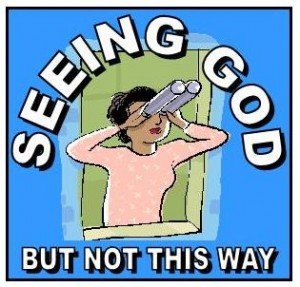 We could talk for months about this week’s parsha, and I might just have to write for FrumSatire for another 10 years to give myself enough Ki Sisa’s to cover each of these topics.There’s the use of the reflective copper for the Mishkan washbasin (Exodus 30:18), the intricacy of the mixed incense (30:22), there’s Betzalel’s sudden wisdom (31:1), the question of the suspension of Shabbos during the construction of the Mishkan (31:12), the nation’s seemingly odd urge to replace Moses (32:1), Aaron’s involvement in the sin of the golden calf (32:2) and the difficulty encountered when we see reconsidering his decision to destroy the Nation of Israel (32:14).  Moreover, there’s the notion that Moses acted on his own authority when he smashed the tablets (32:19), collected the tribe of Levi ordered them to slaughter their beleaguered brethren (32:26) and moved his tent outside of the encampment-at-large (Exodus 33:7).  There’s the profound oddity of God stating that He can no longer be found among the people lest He destroy them (33:4) and this often glossed over idea of the Children of Israel having crowns from Sinai that they could no longer wear. (33:4-6)

But perhaps the most astounding topic in this week’s parsha is that Moses asks God “hareini na es kevodecha” — “please grant me a vision of Your Glory” (33:18) but God ultimately rejects his request, explaining that “lo suchal liros es panai ki lo yirani ha’adam vachai” — “you cannot see my face for no one can see My Presence and live.” (33:20)  Instead, God seemingly offers Moses the next best thing: “v’ra’isi es achorai u’fanai lo yeirau” — “you will see My Back but My Face will not be seen.” (33:23)

This all sounds nothing less than fabulously bizarre.  To relate it to something we can think about more easily, although I’ve never been to a peep show, I imagine that it goes something like this:  there’s a girl in a small room with a one-way mirror and the guy in the other room on the other side of the one-way mirror can see in.  He has a little button that he can push to send messages to the girl and he asks her to remove certain articles of clothing and it proceeds from there — sort of like in The Rock, but the the long-haired individual in the showroom is a little bit more attractive than Sean Connery and they make sure she doesn’t have a chair or a coin with which to scratch up the mirror.

My point in comparing the two is that there’ll come a time during this proverbial peep show when the girl will refuse to undress further and there’s two ways of understanding her refusal.  Either the girl has her limit, contractually defined prior to the start of the peep show, beyond which she will not pass.  If you’re fine with proceeding up to point X, you can see the girl behind door X, but if you’re interested in venturing to point XX, you’ll need to see the girl behind door XX, and so on and so forth.

Another manner of doing business at the peep show, I imagine, is to only have girls that are interested in XXX levels of peep showiness, and how many X’s the show reaches, so to speak, depends entirely on how much the peeper is willing to pay — in other words, the level one can achieve depends entirely on what the viewer brings to the table.  Fees increase as the show proceeds and just like Monty Python’s argument clinic, paying more money keeps the show going and peeping can thus advance not only in quantity but also in quality.  In this case, when the girl in the room refuses to proceed, it’s not an absolute refusal but a relative one, contingent on the viewers ability to meet the aforementioned demands on his wallet.

As explained above, the first peep show business plan can be said to run according to an Ishmaelian perspective, while the second style of peep show management is consistent with an Akivan model.

According to R’ Ishmael’s very transcendent understanding of God, He is there but we cannot describe Him, and if we can sense Him, it is not with the five senses.  He is so far beyond anything we can imagine, because as much as one is psychologically jarred at the idea of hearing mint chocolate chip ice cream, one can taste and smell it.  But for something that exists that cannot be sensed at all, what are we to make of that?  It is beyond our comprehension, which is right where R’ Ishmael likes it.  Thus, when Moses asked to see God, he was not asking to see God, even though that’s what the text attests to, for the text is not a stale, unimaginative rendition of pure literalism.  R’ Ishmael claims that Moses quest for seeing was a metaphor for understanding.  From this understanding arose that notion that any reference to beholding the Glory of God must necessarily be a desire for something else, for the Glory of God is imperceptible by our senses, and like the girls who work at the first peep show who’s contract has limits, we, as mortals, exist in this world bound by the contract of nature and in that contract it is explicitly stated that one cannot see God, and this limit has nothing to do with permission or prohibition.

Not surprisingly, R’ Joshua ben Chananiah, the rebbe of R’ Ishmael, held this view as well and professed it during an interaction with a particular Kaiser (Bavli Chullin 59b, second to bottom line), saying that God is too great to be gazed at.  The sun, which is “but one ten thousandth of the dazzling brilliance of the celestial creatures” (Yalkut Shimoni Ki Sisa 396) cannot be gazed at, so how much more so God Himself.   While this analogy doesn’t match perfectly with the idea R’ Joshua was trying to advance — for the sun can be stared at if enough filters were employed, the intent of his message is clear: seeing God’s Glory is impossible in principle because of the limitations of being human.  This idea is very popular is promoted in yeshiva even though it runs quite counter to the Akivan worldview, and might even be popular among Muslims, seeing how it’s featured in this comic strip featuring Imam Jafar as-Sadiq, Shi’a Islam’s 6th Imam.  Funny how as-Sadiq was born in 702 CE, approximately 550 years following the death of R’ Joshua and 200 years after this idea had been written in the gemara, but no credit is given to the sages.

R’ Akiva’s understanding of the matter operated on a very different scale.  Indeed, “lo yirani ha’adam vachai,”  (“no man shall see My Presence and live”) — but that was merely a rule contingent of the very generalized nature of man.  Many of chazal, intent on climbing the forbidden ladder and reaching the mystical heights of their spiritual aspirations, balked at such restriction on the mortal and instead made the claim that numerous incidents of divine sightings took place throughout history by various individuals (and for those who complain that R’ Ishmael interpreted things ex post facto to fit nicely into his desired path of understanding, this, I think, goes well beyond anything he even tried to say.  What does it mean for chazal to explain something in a certain manner so as to leave room for doing something that would otherwise be impossible?  I don’t know.) — the claim is made that all three of the patriarchs saw God.  Similarly, R’ Abbahu claimed that Shimon HaTzaddik, a kohein gadol of the 3rd or 4th century, saw God when he entered the Holy of Holies, as did Ishmael ben Elisha (the high priest, and not of the Schools of Akiva-Ishmael).  Then there’s the claim that Potiphar saw God when he purchased Joseph and Pharaoh’s daughter saw God when she rescued Moses from the Nile.

What R’ Akiva does with the textual claim that no one can see God and live is to make it refer to man in a relative fashion.  Man cannot perceive God because he is, in what sounds to be a bit tinged with Christianity, although it might very well be that they got it from us, sullied in sin.  If man were not affected by sin, as the claim is made of Moses, he can indeed perceive God, and in fact, he did.

← Obama, Netanyahu & Iran; Jews of Cameroon; Gay Jewish Pop Star & Ramaz Grad Tells His Story in Song
I’m more off the derech than you are →