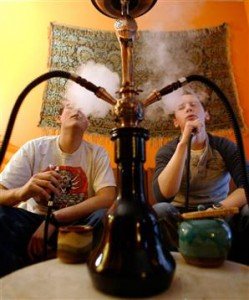 If I could think of a symbol to summarize the post high school “year” in Israel, it be a hookah. For some reason, everyone’s first thing they must do when they get to Israel is to head down to the shuk or to Ben Yehuda and buy a hookah. They also tend to visit hookah lounges and have a lot of pictures all over the place of them looking like gangsters sitting on some lounge chairs on the yeshiva’s roof with tzitzis over their t-shirts, blowing plumes of smoke into the Jerusalem night.

Obviously some of the hookah craze has to do with the “experience” of Israel. Just like most kids end up frumming out after the required 3 months of late night drunkeness due to no enforced drinking age, the hookah symbolizes this new found freedom. For the first time in many of these kids lives they are free to roam and do as they please. Smoking has always been a yeshiva pastime, but I think the hookah can take it to the next level. Not only is it usually fine according to many yeshivas since it’s not as bad as cigarettes, but it has the feeling of smoking weed when you are just smoking some flavored tobacco.

Cigarettes are like a pistol, but holding that long hookah hose in your hand can feel like a shotgun. I’m sure people also like the whole setup too and telling their buddies back home about their cool hookah and all that jazz. The idea for this post came from a fan of mine who runs Hookah Town which is a website that sells Hookah’s, so do me a favor and visit his site and buy something.

27 comments for “Why are yeshiva guys in Israel addicted to Hookah?”