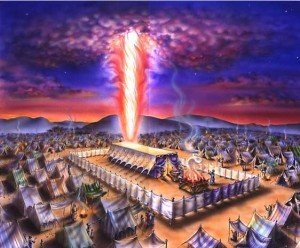 I was really excited by talk of a flat-tax because it would be so much easier to work with than what we have now.  Who wants to figure out if it’s better to itemize one’s deductions or not by drawing up both sets of numbers and seeing which results in more money in your pocket?  Alright — my dad does because he used to work at the IRS.  While his favorite color is blue, his favorite number must be 1099 because he won’t stop talking about it.

But me — I don’t really care for this stuff.  Frankly, it bores me.  It’s also somewhat complicated, even though Tubo Tax is very good about simplifying it as best as it can.  Despite this, taxes in the US are complex to say the least.  And if people have trouble with that, it’s not surprising that people have difficulty understanding what it means when the Torah says in this week’s parsha that God will dwell among us in the Mishkan (Tabernacle).

A few weeks ago, I complained that my 6-year-old daughter’s school spends way too much time focused on things that don’t matter nearly as much as other things that, perhaps, matter more.  They don’t just do this when learning parsha, but also in other subjects as well.  I don’t think they spend any significant time learning science and for math, almost every night’s homework is identical to the one before it.  How many times must we review 3+5=8?  When no one is looking, I throw in some algebra and teach her how to distinguish between insects and non-insects.

So we’re all raised on whatever it is that the 3rd grade morah can understand about the parsha without getting too complex, because similar to the trend of my daughter’s math homework, the 4th grade morah won’t want to go into understanding what God is and what He does any more than the 3rd grade morah.  What is there to say?  We have no clue how to talk about these things to adults, let alone children.

As mentioned last week, there’s a lot of talk about where and how God was going to communicate with Moses in the Mishkan and there’s far from consensus about what exactly happened.  When narrators become storytellers and exaggeration becomes the norm, it becomes difficult to follow the authoritative stream of information back to the origin.  So when God says in this week’s parsha that, “I will dwell among the Children of Israel and I will be their God,” (Exodus 29:45), it’s far from surprising that we can’t seem to figure out exactly what that’s supposed to mean.

Assuming we are to look at this from a completely rational standpoint — because that’s how I sense we are supposed to look at things — we’ll be taking a few things for granted here.  Obviously, if there is no God or there is a God but He’s not the God of Moses, we have nothing to discuss.  And if the Torah is not approached as an authoritative source, we also have nothing to talk about.  We certainly cannot focus on grammar and choice of vocabulary if it would come down to the publisher deciding to use smaller, less sophisticated terminology to avoid having the text run onto another page, increasing the cost of publication.

The Sforno (ad loc.) comments that God was to dwell in our midst “l’kabel avodasam b’ratzon v’lishmo’a es tefilasam” — “to accept our service with favor and listen to our prayers.”  This sounds very pleasant and appealing, and with that I don’t mean to be sarcastic, but I don’t think it’s meant to be taken literally.  If the Mishkan was built to serve as a functional structure in and around which the sacrificial service was to be performed, it’s somewhat cyclical to suggest that God will dwell in our midst to receive this service — don’t have the service and don’t dwell in our midst to receive the service which is performed to comply with Your desire to receive it in our midst.  I’m all for being close to God, but this explanation at face value doesn’t really scratch the surface.  And to listen to our prayers, God needn’t be among us.  He doesn’t actually listen as one listens to friend talk about his job.  God has no ears and will not hear us any better if he sits on the couch next to us rather than standing across the room.  What the Sforno says is a very good commentary for a 3rd grader, but for an adult, it’s not really answering the question — or at least it may appear that way initially.

R’ Ishmael rejected all proposals of divine descent.  What that means is beyond me (and most likely, beyond you as well), but R’ Ishmael was of the caliber to say with confidence that whatever it means is beyond all of us.  I suppose his attitude can be summed up by saying, “let’s not talk about things when we don’t understand what we’re even saying.”  To me, that’s pretty rational thing to say.

What are we to make of this?  Well, for starters, it’s all very mystical.  I mean, you can’t get more mystical that proposing that there are different levels of an intangible, non-physical place that houses a non-physical God who goes up and down as a result of people’s actions — it’s sort of like a big video game in the sky and we’re all trying to advance God to the next level.

What is more insightful, however, is the difference in perspective between the Akivan mysticism of R’ Shimon bar Yochai and the Ishmaelian rationalism employed by those who countered him.  According to the Akivan philosophy, God’s place is on earth with us, and He retreated and returned.  The Ishmaelian perspective would consider such a statement as unbefitting the divine glory — God does not, as a rule, dwell among us.

According to the Sforno and others, making a physical structure and performing physical acts merely served as a conduit in our relationship with God, and this is very much in line with how we view our structures and our actions today.  We strap tefillin on our arms and welcome the Shabbos Queen with reverence and ecstasy as a sign of our inner spiritual relationship with God.  Sure, God’s around all week, but on Shabbos, we turn around at the end of Lecha Dodi and warmly accept the arrival of the day of the Lord in feminine form to be a counterpart to God Himself as the king and we bask in their unified presence.  It’s magnificent and lovely, but it’s all a construct of our minds, really.  If you didn’t know it was Shabbos, in a sense, it wouldn’t be — the same way how if your appreciation for American history is as profound as my appreciation for American professional basketball, and you easily confuse Lincoln for Kennedy, you could easily walk by Antietam Creek and not consider that hallowed ground upon which you walk.

We have the Mishkan not as a true abode for the divine but for a construct.  We allow God to come into our midst as the exception, and when He’s here, it’s meant to convey the closeness of our relationship rather than any sort of reference to our spacial proximity, and when He’s “here,” we can explain His “nearness” in line with the Sforno as leading to greater reception and deeper, more meaningful communication.

← The Largest, Most Public Agunah Campaign Ever
Why are yeshiva guys in Israel addicted to Hookah? →