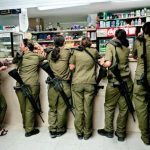 A guest post by Philo originally posted on Dov Bear

Rabbi Shmuel Auerbach has come out strongly against the decision of Israel’s supreme court to strike down the Tal law (which allowed Yeshiva students to avoid army duty.)

He declared that the decision was a

“terrible gzeira that strikes a blow at the heart of Judaism… a gzeira that uproots religion.”

Yes, it goes against every bit of Judaism.

After all, in ancient times no men fought in Shaul, David, & Shlomo’s armies. They sat and pretended to learn instead and the Davidic dynasty never reigned.

No one fought against Amalek when they attacked. They hung out smoking outside the mishkan. Our ancestors were all killed in the desert. We Jews are obviously are a figment of someone’s imagination.

No one fought against the Pelishtim. They were all too busy spitting on little girls who were just trying to watch their fathers’ sheep. The Pelishtim then overran the cities of Judea and established the ancient grand empire of Philistinia.

No one fought alongside Judah Maccabee. They just sat around playing dreidel, claiming that such play was really what protected Bnei Yisrael. That’s why today, instead of lighting something called a chanukiyah, we honor the gods with the winter holiday of Brumalia.

Yup – fighting to protect your people? TOTALLY not Jewish!

← Ever see a Jewish star in the urinal?
Why isn’t there a sex guide for Orthodox Jews? →

30 comments for “Fighting to protect your country is against the Torah!”