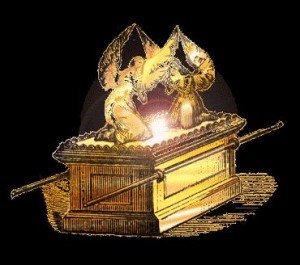 The heavily debated “descent of God” during the revelation at Sinai between the Ishmaelian and Akivan schools is rehashed when it comes to God’s proposed presence in the Mishkan (Tabernacle), with each side taking a very anticipated approach as to where God spoke to Moses.

This week’s parsha describes the location at which God spoke to Moses:

“I will set up meetings (v’no’adti) with you [Moses] there; I will speak to you from above the kapores (cover of the ark) from between the cherubim that are on the ark of the testimony all that I will command you concerning the Children of Israel.” (Exodus 25:22)

This parallels a similar reference to the kapores and the cherubim found in later on in the Five Books of Moses:

“When Moses would enter the tent of meeting to speak with Him [God], he would hear the voice being spoken from above the kapores that was atop the ark of the testimony, from between the cherubim; He spoke to him [Moses].” (Numbers 7:89)

Not surprisingly, these verses conflict with another biblical source for the location of God’s speaking with Moses, which happens to be from next week’s parsha:

“This shall be a continual burnt-offering for your generations, [which shall be offered] at the entrance to the tent of meeting, in the presence of God where I [God] will meet with you [Moses] to speak to you there.  It will be there that I will meet (v’no’adti) for the Children of Israel and it will be sanctified with My glory. (Exodus 29:42-43)

The philosophy of the Akivan school advances that the verse in Exodus 29 is merely a vague reference to the same thing mentioned in Exodus 25 and Numbers 7 without as much specificity in the text for whatever reason, with Rashi on Exodus 25 (this week’s parsha) explaining how the discrepancy is reconciled by following the majority of verses — God spoke to Moses from between the cherubim.

The Ishmaelian school, however, resists such an interpretation, instead explaining that the seemingly contradictory references to the location of divine communication is a function of different times.  Initially, God might have spoke to Moses from between the cherubim but later, when the Mishkan was completed and built, God spoke to Moses from next to the copper alter, which was situated near the entrance to but, in fact, outside of the actual Mishkan.

Somewhat similar to last week’s discussion, this might seem like a very quaint disagreement, seeing how we no longer have a Mishkan, we no longer offer sacrifices and it has been so long since the era of prophecy — who really cares, then, how Moses divided the blood or where he spoke to God?

However, observing these seemingly superfluous and inessential details serve to strengthen and further ossify the continuous thread of conflict between the philosophical and theological approaches of the two aforementioned schools of thought.  R’ Akiva, inclined to embrace a somewhat tangible embodiment of the glory of God, promoted the view that the shechina (divine presence) resided in the west (i.e. between the cherubim, on the kapores, in the Holy of Holies, which was at the westernmost aspect of the Mishkan).  The sages who accepted this outlook considered the space between the cherubim to be of supreme distinction and cited such verses as Song of Songs 1:13 to make a point of this understanding: “Like a bag of myrrh is my beloved [God], between my breasts does He lie,” a reference to the two cherubim.

R’ Ishmael, very resistant to any suggestion that the shechina could exist in one place more concentrated than in another, refused to accept this interpretation, instead quoting verses describing the expansiveness of God’s presence: “Do I not fill heaven and earth?” (Jeremiah 23:24)  How then could God condense Himself into a space when He is not physical and space has no relevance to his essence?  It was because of this that the Ishmaelian school of thought rejected the notion that God’s abode was anywhere, let alone between the outstretched wings of the cherubim.

In conclusion, one could question the benefit of the Ishmaelian understanding of God’s location during communication with Moses to be just outside the Mishkan rather than between the cherubim — he simply “moved” God from one place to another?  What possible difference could this make, for God was still speaking to Moses from a single place of physical existence, which ostensibly contained some greater degree of Godliness than a place two steps away where Moses did not commune with God?

In response, the Akivan assertion that God resides in the west and manifests Himself on the kapores between the cherubim smacks of profound mysticism, for God then has a dedicated space within this world in which He permanently dwells.  Contrast this with the approach of R’ Ishmael, which claims that God spoke to Moses at the entrance of the Mishkan, which happened to be somewhat near the copper alter.  The verse speaks not of a specific locale, but rather of a sort of happenstance of place — with the verse utilizing the terms “shama” and “sham,” (Exodus 29:42) meant to convey the place of the communication, rather than any particular place of significance at which said communication was to be held.

← 10 Things I hate about being frum
Will the Ultra-Orthodox Be Forced To Join the Israeli Army? →