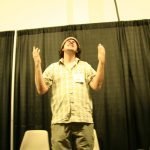 I have written extensively on the ways people daven, judging them by the ways they pronounce things and the movements they make. Heck, I’ve written and done comedy routine videos on the most skipped parts of davening and why that is, but I’ve never actually written about the davening itself. Now I know that some of you are going to get those tzitzis of yours in a bunch, but take a moment to pull that kishke out of your tuches, or simply leave the page if my making fun of our sacred prayers is too much for you to handle. Hang around and you may actually learn something.

I know this is going to sound cliche, but Shemona Esrei is my kind of prayer. You lock yourself into a little space in the corner of shul, next to your car or on the top of a mountain and go talk to God. This is one of those scheduled talks, this is not one of those situations where your screaming at God and giving him the finger. The prayers are all planned out, we say it three times a day and if you aren’t careful it can get pretty repetitive. A few years ago I decided that anyone who davens with kavannah and doesn’t know what they’re saying is full of crap. How can you plead with God of all people if you have no idea what you’re pleading? Of course, some of you more learned folks may have some sort of Talmudic response to my blasphemy, but logic states that if you don’t know what you’re saying, you might as well shuckel like a moron so that God can understand that those violent shakes have something to do with all that biblical Hebrew as a third language coming out of your mouth. This all means that I decided to learn the davening and in the process I came up with a unique way of davening shemona esrei.

Mogen Avraham: God is the shiznit, he creates stuff and was the God of all. I’m down with creation, I’m down with the awesome and supreme God. I wonder if Atheists skip the first bracha? I’m not sure about the whole shield of abraham thing, but I like the bestowing of kindness.

M’chayei Mesim: It’s all about living man and they also decided to throw in some reincarnation here. My focus in this bracha is always about healing and support of those who cannot take care of themselves. Sure, maybe I’m a sucker for Tikkun Olam. Not sure what I’m going to come back as in the next life though. I’d like to be a mountain lion.

Ata Kadosh: Not my kind of bracha in all honesty, but a good segway to one of the most important bracha’s in the shemona esrei.

Ata Chonen: Thank God for my knowledge, ability to think and all that jazz. This is where I always think about utilizing my God given abilities in life, writing, cooking, navigation, memory, etc…I also question the purpose of this knowledge and sometimes, if I’m in the right place this bracha could end up being a little bit meditative.

Hashiveinu: This is where I wonder if I’m doing the right shit or if I’m straying far from the Lord. This is where I ask God to put me on a level where I can do what’s right, of course right is all relative and then I start asking God to get rid of my existential woes and bring me back so I can cleave to his cleavage, I always figured God in the male form would be a big cuddly fellow with large man boobs for us to nuzzle up against as if they were large pillows.

Selach Lanu: I call this the wasting seed bracha, I just always hope my two clops are enough to prevent me from boiling in all that wasted semen. Sometimes I clop for loshon horah, sometimes for writing something evil on the blog and sometimes to not judging someone favorably and sometimes for getting angry. Repentance; everyone’s doing it man.

Re’eh: I usually end up missing this bracha and going right to the next one, I don’t even know how to relate redemption to myself and haven’t figured out a use for this bracha yet.

R’phaeinu: As a cook I have cuts and burns, as a biker I have scars and tree incidents and when I myself am not in need of healing – it’s a good bracha to use for someone else. Everyone knows someone that’s suffering in one way or another and this bracha is a great way to focus on someone other than yourself.

Barech Aleinu: Everyone’s favorite, because as we’ve said before life is about money. Everyone wants more of it and no one ever seems to have enough of it. Of course, if you’re in Israel you can also ask for rain, but here in the states – we are in it for the money. I try not to focus on money, but asking for dew just seems odd to me.

Tekah B’shofar: Another bracha I’m not so into, I kind of like exile and am not the biggest fan of living in Israel and joining all the other exiles. Although maybe it’s just talking about this years siyum hashas.

Hasheva: I’m also not so sure about restoring sanhedrin and talmudic times judges, but I also have in mind that God is being fair in his judgement of me and others and not just basing it on how big their yarmulke is.  I also have in mind that no one besides God can really judge me and that I shouldn’t be doing what everyone else is doing, but what I should be doing – whatever that may be…

V’lamalshinim: Down with those heretics, with Deborah Feldman on our minds – I’m sure there has been an increased on this bracha which asks for God to speedily uproot, smash, cast down and humble all those wanton sinners. Just put the steamed wanton down and back away slowly…

Al Hatzadikim: This is where I daven for all those brilliant hidden tzadikim I know and all my friends who are hopeless when it comes to careers and love lives – but somehow know a lot in the Torah department. For some reason I feel that all of my ex-yeshiva, still frum, single and very learned friends will be taken care of because of their righteousness. This is also where I pray that the elders and gedolim do what’s right and not what someone shoved in front of them. I pray for the righteous to remain righteous, but they are slowly fading into the wastelands of Rebbe corporate sponsorship and BS bans.

The next two bracha’s blow. I’m just being honest, rebuilding the temple doesn’t do it for me in any way shape or form and Davidic reign didn’t sound too great…maybe, it’s good to remain ignorant of the translation and just carry on in your violent newly minted post aish whacky baal teshuvaness, but I’ve already broken the seal.

Shema Koleinu: Damn straight I want God to accept my prayers and listen to me, heck I’ve been having more kavannah lately and he better show me the money. Don’t turn me away empty handed dawg.

Ritzeh: Another bracha which has no use for me, well I could use some temple barbecue. I’m willing to bet good money that when the temple services are brought back, someone is going to come out with a line of 3rd Temple Hot Sauces to spice up that karbon barbecue.

Modiim: Probably the only bracha universally recognized, because who doesn’t want to give thanks. Thanks for the awesome life, for my eyes, working body parts, hot future wife, car, 3 bikes, beautiful scenery, good job, free rent, awesome trails, yesterday’s sunset. You can really throw in anything right before that bow, even when I’m rushing, you shouldn’t rush, but man’s curse is that we don’t have enough appreciation – I like to take a moment to thank the Lord for all the bounty in my life. Even when life sucks buttholes, I give my thanks, because if life was all good – then I’d assume God forgot about me and I was using up all my brownie points in olam hazeh and that when I got up to the olam habah I’d go immediately to be poached in semen.

V’chul Hachaim: Just pile on that thanks, I did give you life after all. As if the narcissistic God during pisukei d’zimra wasn’t enough…

Sim Shalom: I have a feeling that super liberals love this bracha, everyone could use a little peace in their lives. There really is nothing like that peaceful easy feeling that The Eagles sang about and that’s what Sim Shalom is about for me.

Find out more about shemona esrei on 4torah.com

28 comments for “The frum satire guide to Shemona Esrei”