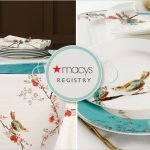 The natural progression of wedding planning dictates that somewhere along the way you should register with some big box store to take the fun out of gift giving. The first time I heard about wedding registries, I really didn’t believe it, what was the point of getting a gift if you knew what you were getting? It seemed to me that wedding registries took all the fun out of gift getting and giving. Had the old box shake to predict what gift was inside, lost its weight?

Of course, in my old age, I’ve begun to appreciate and understand the chochma behind wedding registries, but that doesn’t mean I’m about to play the game. My buddy tells me that there’s a reason everyone registers at Bed Bath and Beyond and that’s because they give you cash for returns. This of course boggles my mind, because if I’m registering for something I need and want, why on earth would I want to return it? But when I responded like this to my friend he gave me a speech that sounded more like a well thought out Marine landing strategy for Normandy.

He says that you have to register for more things than you need because many people want to see a choice. He also says to register for both big ticket and small items alike to give more of a choice. Then you can return unwanted items for cash, he tells me that prior to the wedding men don’t see the point in gifts and women are all about receiving items and holding onto them. Then my friend in all of his 1 year of marriage grand wisdom tells me that after marriage the roles change and it switches. I’m not sure I agree, or can agree, since I’ve never been married before, but I’d like to think that I’m better than just using complex strategy and comparative shopping to get the best deals on gifts. He said that almost everything any store has can be bought at Wal Mart, but since Wal Mart was ghetto most people don’t register there. He forgot that little tiny factor of mistreatment of workers and that whole thing of shutting down independent stores and farmers for the sake of enormous stores.

Maybe I’m being too moral? Maybe I should just use the cash cow strategy and garner the most points and get the cheapest stuff. While I’m at it, maybe I should listen to the few people who keep saying that the more you spend the more you make back in gifts on your wedding. Since when did a wedding become an investment, I always thought of it as the most important simcha of your life that you can share with family, friends and community – cheapening it to a cash cow seems a little low in my opinion.

Find out more about Jewish weddings at 4torah.com

35 comments for “Weddings are about the simcha, not the money!”