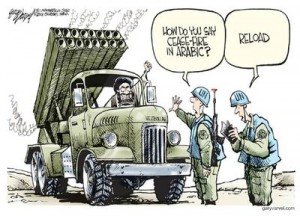 Every few days or so, I get an email from someone asking me to write about some company or website that called Israel Palestine or something along those lines. I’m sure I’m about to open an old can of pork and beans here, but who cares? Sure I care about my fellow Jews in Israel and all the crimes perpetrated against them for simply living their lives. So yes I kind of care, but it seems like a moot point to keep throwing a shit fit every time some uber left wing organization or website decides to sneak in the Palestine label. If you really care that Facebook or Delta Airlines is using the term Palestine instead of or with Israel, boycott them or organize a boycott. Making a big stink seems a bit slacktivist to me, that’s all.

I really shouldn’t label it slacktivsm because it actually requires more than sharing or liking something, though I’m willing to bet that 80% of the people that said the following on their facebook status update didn’t actually do what they told others to do:

If this bothers you, repost this as your status. Shame on Facebook.

Before you all grab your uzi’s, my dear friend Mikel says that the reason for this is because: Nothing to do with politics. No Israeli mobile carrier will work with Facebook the way they want.

In my mind these folks do it on purpose, I can imagine the strategy meeting at the new Facebook offices in Menlo Park where they are deciding how best to piss off the Jews and get more traffic to the website. You see, if they start throwing the term Palestine around, the advertising on the side my irk some Jews enough to raise those click through rates and suddenly Facebook is making bank because the Jews are going ape shit over this same old song and dance that does nothing to improve the Israeli image whatsoever. If anything it may make it worse.

Of course, one may argue that by making a stink of it we are showing the world that Palestine doesn’t actually exist, because if they keep on saying there’s a Palestine people may actually think it exists. Although, this shouldn’t really matter because most people will definitely agree that some sort of Palestine does exist nowadays whether we like it or not. It’s kind of like the Triborough Bridge in New York, it was renamed the Robert F Kennedy bridge, but no one calls it that and so the Triborough Bridge, though not technically in existence anymore, is still there in everyone’s minds.