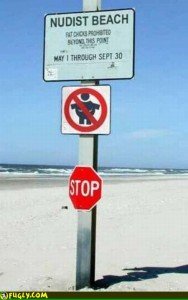 A friend of mine who considers himself a frum nudist posed the following halachic question to me that me thinking about the growing numbers of frum nudists around the world. He asked me what to do about making a bracha when he has no clothing around. He told me that as he’s become more religious, he’s started to wear tzitzis and a yarmulke because those are a “Yids Clothing” according to him, but that davening and brachos can be tough if there aren’t any blankets or towels around. What’s a frum nudist to do?

I know what you’re thinking, how tznius is it to be a nudist, but when you think about it a little deeper, going nude is actually a good thing. One of the biggest problems with tznius these days is that it’s used as a way to keep women in check, not men, by over sexualizing everything right down to a woman’s elbows and toes – so that men think of everything in relation to women in sexual terms. The extremist tznius of today is basically teaching men that women are only good for making babies and keeping the back seats of the bus warm. Frum nudists are changing this view, instead of over sexualization, suddenly everything is out and in the open – to the point that people stop staring and stop being such douche bags about tznius.

I know you think this is all a joke, but I’m being serious, a life of nudity is better than a life of sexual repression. Once you get past all the nudity everything becomes normal, it’s just like hanging out with people who have clothing on, but they’e in their birthday suits.

I was told that the best way to make a bracha in the nude is to go into the water deep enough to cover your ervah. I have also been told that the complications arising from frum nudist women going to into a body of water that can be a kosher mikvah at the wrong time of the month is becoming a big issue. I have no answers for such halachic conundrums. I do wonder how nudists make a bracha on tefillin or tzitzis since you probably aren’t putting them on when your penis is under water.

← Do you hold of Valentines Day?
What really happens on mehadrin buses! →

45 comments for “Halachos for frum nudists”