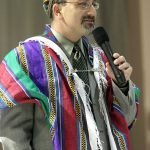 A few years ago my friends took me to my first Reform service, in fact it was the first non-Orthodox davening of any type that I had attended and I felt pretty awkward going. Growing up Orthodox you hear some pretty nasty rhetoric about anyone who isn’t Orthodox and so I figured they must think the same way about us.

I can spot an Orthodox person pretty quickly and figured that those Reform Rabbis could too, so I decided to play dumb. The first thing I decided to do was make believe like my yarmulke wouldn’t stay on my head for longer than 3 minutes at a time. I had always noticed that whenever someone non-Orthodox came to our synagogue growing up, their yarmulkes would constantly be falling off because they never wore them.

Then I grabbed a talis and put it on like a scarf. I could never figure out why non-Orthodox Jews wore their prayer shawls like scarves, but I figured that help me blend in better. I really thought the Rabbi or other congregant would out me and make me leave or something. My friends thought I was insane, I also decided to keep looking at my neighbor for the page number in the siddur.

One of my favorite past times nowadays is to see how different groups change the traditional siddur (prayer book) This was my first time using a non-traditonal siddur, may have been a Sim Shalom and I decided to see what they edited. I knew the morning blessings would be awry, because thanking God for having not made me a woman is a bit sexist it seems.

I also decided that I wouldn’t use my finger to bookmark the place in the siddur. One of the ways I was able to spot other closeted Orthodox folks at this minyan was based on the way they held their siddurim and marked the page with a finger inserted into the closed book. I also monitored everyone’s body maneuvers and noticed one person bowing and swaing too smoothly to be something who wasn’t a regular at an Orthodox minyan. I saw one woman saying everything by heart and figured she must be Orthodox.

No one ended up outing me and through the years I have ventured out more and more to the point where I’m comfortable in most any service except for the Renewal stuff at Isabella Freedman which is just too hippie for my tastes. I’m not afraid of being outed and go as a proud Orthodox Jew, because we are all in it together.