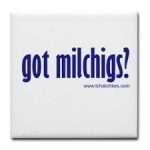 The sad truth is that anyone who veers slightly off the path of normalcy in the frum community is labeled as open minded, frum but with it or that dreaded term “modern”. Even to hint at enjoying milchigs any other time than at the pizza store or on shavuos is liable to get you in trouble with the nosy neighbors who will most certainly mention this breach of frummy contract when it comes time to marry your children off.

What’s so bad about serving milchigs on shabbos?

The bad is that it’s just not done and something’s not done in the frum community you can’t just go and be different. Individuality is kind of looked down upon, but no one will ever admit to it. That’s why Jewish internet dating took so long to catch on, only when frummies understood that the shidduch crisis was more of an unedning epidemic did they understand it was time to take drastic measures – even if it meant handing over their pictures to people before they ever went out. Milchigs is the same way, no one does it, but once people realize they could save boatloads of money and not have to complain so much on frum forums about the high costs of being frum – they may change.

Of course, I’m not saying that milchigs is cheaper, good kosher cheese is expensive, good produce is pricey and having all that color besides brown at your table may scare people who think you’re being a bit untznius. I should also mention that it’s commonly held that fish does not satisfy your requirement for the shabbos seuda, even Rav Kook who was a vegetarian would eat a small piece of chicken on shabbos. Come to think of it, Rav Kook is one of those holy men who the yeshiva world doesn’t have much to do with because he was a little too “out there”.

Now don’t get me wrong, lots of frum people have milchigs on shabbos, but seldom are they frum by mainstream standards. I’m not sure that many regular frummies from Flatbush or Far Rockaway ever have milchigs at a seuda. In fact, many regular old frummies don’t even eat a milchigs meal on shavuos and will instead have a piece of cheesecake at kiddush and a full on meat lunch.

Find out more about milchigs at 4torah.com