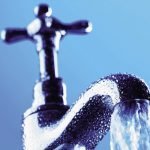 The Benei Brak Shabbos Goy Union is out on strike after a controversial ruling by a rabbi yesterday. Now that tap water is banned on shabbat, many union members fear that they will have to do a lot more work than just turning on crock pots and televisions. Prior to the tap water ban, many union members were paid by the shabbos, but now many of them are demanding pay per-job because tap water is one of those things that people can abuse the workers easily with.

The Jews of the neighborhood apartment buildings who live in the upper floors where the tap water cannot be turned on on shabbat, have been seen carrying water like in the shtetl days. Already, as if they have known all along that this day would come, some folks have already established erev shabbos water carrying businesses and no doubt many former union members will sell tap water on shabbos for barter or credit.

Many union members have been wondering what may be next. They have seen many bans be a boon for business throughout the year. What we at FS News are wondering is when they will ban toilet flushing because they are also using that same tap water and pumps that have just been deemed assur on shabbos.