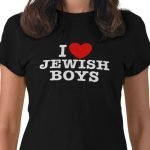 I’m a conservative-Jewish teenager who graduated from a public high school in June and is now in first year at a small liberal arts college. I really love reading your blog! I realize that I’m not your typical reader , so I just wanted to tell you how I found this blog and why I find it so intriguing!

“I had just finished work for the summer at a day camp run by the local JCC. The staff varied in levels of observance from secular (didn’t even fast or go to shul on tisha b’av) to modern orthodox. The most observant girls wore skirts and t-shirts showing their elbows and the guys wore kippahs and sometimes tzitzit. The camp requires all staff to participate in co-ed swimming and dancing (the dancing doesn’t involve touching or holding hands, just cheesy songs like the Macarena).

Growing up in public school, I have had virtually no exposure to Orthodox Judaism. I do have an old friend who recently became a BT; after attempting (and failing!) to convince me that shaking hands with men will lead to sex, she begrudgingly gave me all of her old pairs of pants. My other extensive database of knowledge has come from cultural stereotypes (yes, I did hear the urban legend of the sheet with the hole when having sex!) and seeing the black hatters walking home from shul on Saturdays.

After a long week of learning about safety, arts and crafts and ways to entertain four year olds, everyone was anxious to find out who they would be working with for the next two months. It was decided; one yarmulke-and-sometimes-tzizit-doting yeshiva high school bochur and another short-shorts-and-boy-hugging public school girl would be the staff for cabin three.

Efraim was amazing with kids, artsy, funny, compassionate and an all around great guy. In between applying sunscreen and playing duck duck goose, we would swap stories of Thursday night mishmar at his all boys yeshiva high school and the Christmas assembly at the public school I had attended. I was seriously fascinated by this whole world of kosher tupperware (his daily cream cheese bagel came in a container marked “milk”) and minor fast days whose existence I was not previously aware of. I started to google things like Bnei Akiva, the 17th of Tammuz and kashrut.

In short, I was interested in this guy. Not in a sexual way, I just wanted to know what it was like to live his life. It was sheer curiosity. I wanted to experience what a shabbat was like in his neighbourhood; I wanted to sit in on one of his talmud or gemara classes. I had strange dreams about running into him walking home from shul on shabbos or getting invited to his house for Friday night dinner. I wanted to go to a wedding with a mechitza and no mixed dancing; I wanted to know why mixed dancing was bad. So I looked it up.

I found out about many Jewish laws, about the shulchan aruch and about halakha. I read about the laws of negiah, the three weeks and the importance of not committing a chilul hashem. I learned that it’s impossible to agree with every rabbi, as they all have their own opinions and would answer questions differently. How does one strike a balance between the secular world and jewish values, for example shaking hands and keeping negiah? Well, I learnt that there is no right answer to that question. What captivated me the most was wondering where Efraim stood on these issues. I didn’t ask him. I still don’t understand why I find this stuff so interesting, and I thought he would find it strange.

Heshy, this is how I found your blog. I started googling things like “how to tell if someone is shomer negiah” and “is tucking in tzitzit allowed?”. This blog gave me a pathway into the regular, every day life of Orthodox Judaism; from the cholent at kiddushim to awkward not-sure-if-you’re-shomer handshakes. I have read so many posts on your blog, and have attempted to pinpoint Efraim’s hashkafa (one of the many new additions to my vocabulary thanks to your website). I read humorous, enjoyable entry after entry about the difference between MO and yeshivish, blue jeans and correlation between kippah preference and observance level.

When the last day of camp rolled around and we were all saying our goodbyes, I ran up to Efraim to give him a hug. I immediately realized that it was a mistake; as I wrapped my arms around him, he stiffened up, looked at the ground and started to mumble. A fellow counsellor saw our awkward encounter and immediately ran up to us and loudly said “Stacey, he’s shomer!”. ”

… so ya. I realize the conclusion is pretty unsatisfactory, but basically that’s because it was incredibly awkward and I still feel weird about it. I also realize that this is a really weird piece of writing to be emailing you, but I kind of wanted to show someone and didn’t know who else to show it to.

Thank you so much for this great blog! I literally check it every day (for a while I was wondering why there were never any updated posts on Saturdays, and then I was like :O he observes Shabbat … duh!) Anyways, thanks and Mazal Tov on your recent engagement!! Also, I realize you probably get a million people sending you stuff every day, it would be awesome if you could reply, and feel free to post this on your blog.

← Do we really need to teach modern orthodox folks about sex?
Bressolver Propaganda →