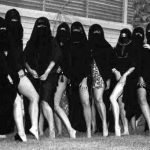 I write to you from Israel – this is my view as a religious person who is deeply disturbed by the growing anti-Haredi movements among those Israeli’s who do not understand what we are for.

It wasn’t enough that the anti-religious movement that is being fueled by a rabidly anti-religious left wing secular media wanted to dictate what a sincerely devout religious sect wanted to do with their own buses and schools, but now those same anti-segregation scum are targeting the places we pray.

As I walked to shul this past shabbos, I was assaulted by feminists and other secular folks calling me Jim Crow. They couldn’t have been mad about the buses, since the kosher-mehadrin buses don’t run on shabbos. Instead they were marching outside of my shul, yelling at me to integrate the ezras nashim and the men’s section together. Carrying signs that said things like “Mechitzas are not separate but equal” and “women deserve just as much leg room as men” these scumbags really bothered me.

I personally think that the anti-religious media has really blown everything out of proportion. Yes, most of the violence is uncalled for, but I’m sure some of it is called for. If a woman boards a mehadrin bus and clearly violates halacha by leaving the ezras nashim or showing her elbows – she deserves a beating, this is stated clearly in the gemara. Also, unmarried women should have to follow the curfew – it’s their own fault if they are out at the wrong time.

Yet the secular media, that doesn’t understand halacha continues to spread their sinas chinam throughout the world. We will not stand idly by as the left wing media makes a mockery of the things we hold sacred. I’m not going to be another apologetic, separation is the only way to go and some people may have to get spit on in the process – it’s just a problem when the media blows it out of proportion.

Find out about Haredi Segregation on 4torah.com

← Link of the day: Diary of a Rabbi and a Hooker
Shlock Rock – Kosher Cake →