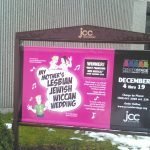 Did you pay for and plan your own wedding?

In general, the frum world places very little responsibility on the actual folks getting married to do much besides pick out some clothing and attend their sex classes. In most cases the parents do most of the work and pay for everything. I haven’t met many folks my age who had to pay for and organize their own wedding, yet it’s kind of fun and I like independence. In all honesty, I never thought it would be any other way. As soon as I knew this girl was the one (about 3 weeks into dating her) I started scheming about weddings.

Prior to popping the question we had talked a bit about weddings and our budget and about how we could pull it off cheap. When we were thinking about having it in New York, we were actually going to have two former partners of ours do the food – her ex is a sushi chef and my ex is a big fan of Asian cuisine – we were actually thinking of just doing Pho and Spring Rolls. We scratched New York because for the money (apparently $25,000 is cheap for a wedding) we decided it had best be on the West Coast.

My biggest problem with New York weddings is that they mostly suck, for 20 grand you get some lame ass dry chicken, some lame ass frummy band and a bunch of people who never remember your wedding because it’s just like the one they came from and the one they have to go 3 nights a week. Sure, I could open it up to the fans, but it seems like a lot of money for crap. I’m also quite lucky in that my girl is low maintenance and doesn’t need to keep up with the Freedman’s. I know folks who have taken out loans and mortgages to pay for their children’s weddings and I’m not putting that kind of pressure on anyone.

Ideally we would love to have a klezmer band, a lot of boozing, some nice looking food and some grand ol’ times. Of course this all costs money as I learned last night when I sat down with the caterer to look at prices. It all adds up, linens (super pricey) flowers (which I don’t want) a bouquet (which neither I nor she want – but the caterer insists the have) and that pesky photographer. Not to mention booze (from costco of course – unless we do BYOB) the band (any suggestions are appreciated and the invitations. Good thing this caterer kind of does everything, right down to invitations and making a custom cocktail to stretch the booze. Let’s just say that while it can’t be done for $10,000 it;s going to far less than the rock bottom prices of crappy weddings in New York and we are going to have some pretty memorable food.

I was recalling the big difference between now and the first time I got engaged (I was young and stupid the first time around) but the girls parents jumped right into action, they found the hall in Williamsburg and all I had to do was figure out who to invite, what seforim I wanted to grace my cherry wood frummy bookcases and pick out a watch which the father in law is supposed to buy you (I really wanted an altimeter and a watch with a barometer – but it never got that far) At the time I never thought twice about two perfectly able adults not doing their own wedding and letting the parents do the whole thing. Are most frum folks like this? I’m kind of curious if anyone actually organizes and pays for their own wedding.

104 comments for “Weddings are darned expensive”