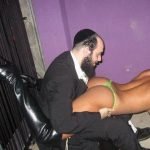 Someone sent me the link to a new blog called the Secret Diary of a Rabbi and a Hooker and I immediately noticed two things, first that the author is probably European and two, that the author is probably not frum. I think that the second fact made the blog far less interesting, it seems too well written and not juicy enough for it to be frum. Almost every site that was ever some sort of frum erotica was over the top pornographic and very poorly written.

I smelt the scent of a woman that so sweetly graces her beautiful body; the sensation like that of golden syrup rolling gently down my tongue. I yearned to rest my head between her breasts, which appeared to me now as a valley between two lush mountains, where the finest vineyard had been planted and whose Cabernet Sauvignon grapes, produced intoxicating wine that leaves helpless all that dare venture there. Her moist lips were as delicate as a valentines rose dampened with sliver droplets by the morning’s dew!

I don’t know very many Rabbis who would or could write such a thing, it seems like something I would write, but nowhere in the blog does it reference much more than the fact the author claims to be a Rabbi. I wish it was frummer, because then I would actually read the thing.

18 comments for “Link of the day: Diary of a Rabbi and a Hooker”