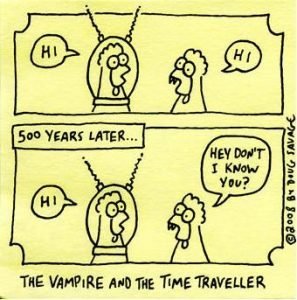 The start of a new year is a time for resolutions not because there’s anything intrinsic about January 1st that begets rejuvenation, but because there’s an artificial freshness that accompanies the annual changing of the calendar year — as such, I’ve noticed that I’ve lately spun off course and am taking this opportunity to redirect my efforts. Although Heshy gives me no instruction and makes no demands, my self-imposed guideline is to assist in widening people’s understanding and allow for greater expansiveness in people’s acceptance — to people who feel like they must reject Judaism, either in part or in whole, because of the many things they have come to see as silly or untenable as they mature as observers of the universe, I say to them: perhaps you mustn’t necessarily accept Judaism as it was given to you in 3rd grade.

This week’s parsha recounts how Jacob blesses his offspring as he nears death (Genesis 47:29), but Rashi quotes an astounding piece of Talmud on this point: R’ Yochanan says that Jacob did not die. (Bavli Ta’anis 5b, first wide line)  This claim is immediately questioned: “Was Jacob not embalmed, mourned over and eventually buried?”  In response is a rebuttal in the form of a exegetical tradition held by the claimant:

“But as for you, do not fear, My servant Jacob, the word of Hashem, and do not be afraid, Israel, because I am saving you from distant places and your descendents from the land of their captivity…” (Jeremiah 30:10)

A parallel is drawn between Jacob and his descendants — just as the latter are prophesied to be alive at the time of the ingathering of their exile, so too the former is/will be alive.  On this portion, Rashi himself (Ta’anis, ibid.) comments:

Lo meis: elah chai hu l’olam — “He did not die: rather, he will remain alive forever”

But without this surprisingly novel way of reading the text, it amounts to nothing more (though nothing less) than any other section of bible text that is written in flowing poetry, referencing identical entities with multiple synonymic forms, like these instances in this week’s parsha:

It certainly appears that the poetic biblical double talk in the aggadic portions is not meant to be taken nearly as literally as Rashi suggests, and to propose such a fantastical derivation from Jeremiah 30 is quite over-the-top, yet consistent with the extraordinary sort of stuff we’d expect from R’ Yochanan, a 3rd generation disciple of R’ Akiva.  And for whatever reason, Rashi was not bothered by such a mystical understanding of the universe.

Tosfos’ comments on the Ta’anis section makes two claims to support R’ Yochanan’s mode of interpretation: first, the verse makes no mention of Jacob’s death (it uses the word vayigva [expired] and not vayames [died]) and secondly, because of the incident relating to Chushim the son of Dan mentioned in the Talmud (Bavli Sotah 13a).  Let’s evaluated both of these points.

To say that Jacob didn’t die because the Torah uses a synonymic alternative means of referencing his passing isn’t sound evidence that he didn’t die and amounts to tremendous mysticism, indeed — the Torah does not make any mention of Rebecca’s death (only that she was buried in the Cave of the Patriarchs and Matriarchs, Genesis 49:31); perhaps she was buried alive!  When the Torah mentions the death of Isaac (Genesis 35:29), it says “vayigva Yitzchak vayames,” using both terms.  And in case someone wishes to claim that being “gathered unto one’s people” is to generate some controversial understanding of pseudo-death, it even throws this is as well, “vayei’asef el amav.”  Moreover, the term vayigva is used to refer to the expiration of all life not carried aboard Noah’s ark (Genesis 7:21).  Rashi does not comment on the talmudic passages that refer to these expired elephants, capybaras and bearded dragons as chai heim l’olam (they will remain alive forever).  Incidentally, the Hebrew word for ‘corpse’ is gviyah.

And as for the well known narrative mentioned in Sotah (21st wide line) that describes the behind the scenes of Josef’s ascent to the Land of Canaan to bury his father (Genesis 50:7) — Esau blocked the path of Jacob’s burial procession as it reached the Cave of the Patriarchs and Matriarchs and how Chushim the son of Dan, somewhat deficient in his senses, killed Esau for demeaning the honor of his grandfather.  Tosfos refers to is the next bit in the midrash — how Esau’s eyes popped out and rolled near Jacob, at which time Jacob’s eyes opened and he smiled, with mention of Jacob finally exacting his sweet revenge against his brother.

Ostensibly, Tosfos meant to adduce this narrative as evidence that Jacob hadn’t yet died.  As an Ishmaelian rationalist, I’d take the position of the Maharatz Chayes and counter that this midrash, as with most midrashim, is at best a legend of inspiration, rather than extra-biblical historical documentation of backstage events.  But even according to an Akivan mystic, does this story suggest for even one moment that Jacob remained alive and intact from before his embalming and those many days of Egyptian mourning?  Certainly not!  According to the mystic, this midrash is to be understood as nothing less than miraculous, and again, I don’t think the miracle they would claim would be that he remained alive through his embalming, but rather, that a dead Jacob was able to open his eyes and smile.  As support for this, I bring the very next line in the Talmud, which makes mention of Rebecca’s supposed prophesy of “lamah eshkal gam shneichem yom echad,” that both of her sons would die on the same day (Genesis 27:45) and explains although their deaths did not occur on the same day, their burials did.  We see, then, that Jacob did not die that day, but he was buried.  To support R’ Yochanan’s claim made some 1,500 years later that Jacob had still not died, Tosfos might want to provide some example of function after his burial, but he does not.

The Maharsha provides what appears to be a very obvious solution to the problem with the comments of both Rashi and Tosfos — Jacob is still alive in spirit, but not in body.  The problem is that we all know this from another lesson we learned from our 3rd grade rebbeim, but this one not so fantastical.  If we accept the existence of the God of Moses, then we accept the existence of a divine oversight that relates in some fashion to a classification of deeds that result in either reward and punishment (or both).  If we understand this to reflect reality, then it’s a great statement of profound spiritual consideration that the righteous “remain alive” through their deeds, as expressed in the Talmud (Bavli Brachos 18a, 3rd line from the bottom) while the flipside — that the wicked “have never lived” — can also be said to be true (18b, 10th line).

Last week, I was in a shul I’ve never been to for my landlord’s kiddush upon having a new baby and I took the opportunity to ask Eliyahu, the 5th grader sitting next to me at the kiddush, what he thought of this Rashi (even though, at the time, it was from the next week’s parsha).  He bolted from the table and I immediately conjured up the possibility of his father coming back with him and punching me in the nose for starting up with his kid — but luckily, Eliyahu returned alone and told me that his father told him that it means something along the lines of “the merit of tzaddikim (the righteous) live on forever.”  See how easy that was…so why do we need the Maharsha?  But then I asked Eliyahu if Abraham, Sarah, Isaac, Rachel and Joseph (the righteous!) were not righteous, for the Torah refers to their deaths outright — that one he could not answer.

So the Maharsha explains that the focus on spiritual immortality is mentioned by Jacob because he is the one linked to his descendants by a verse in Jeremiah 30, not Abraham or Isaac, and the reason for this is because it was only Jacob who passed on the heritage of proto-Judaism to all of his children, while Ishmael the son of Abraham and Esau the son of Isaac rejected this spiritual inheritance.

Find more on the parsha at 4torah.com