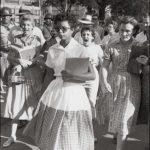 Thw following article is not a joke, it was actually published in all seriousness…

Amidst all the controversy pertaining to mehadrin bus lines at the moment in Israel, sparked in part by a woman who instigated the issue when she intentionally boarded a mehadrin bus in Ashod, YWN Isreal is pleased to present the following Kiddush Hashem that was sent to us today with a video attached:

“I was riding from Ramot to Yerushalayim proper at the front of mehadrin bus number 40 when the bus stopped by the new Ramot Mall. Due to the time of day, the bus was pretty full, so when a non-charedi woman boarded the bus she stood near the driver. I flinched, half expecting someone to tell her to go to the back of the bus. Yet, Baruch Hashem, two gentlemen, as she called them (and yes, one can have a beard and long payos and still be a gentleman), gave up their seats on the front row of the bus. Many on the bus, driver included, were shocked at the kiddush Hashem, which prompted me to video her and ask her to tell the story in her own words.

My response: So someone decides to do the right thing and you view that as a kiddush Hashem. I’m sick of hearing about the Charedim and their attempt to block women out of any public sphere. If they were so frum, they wouldn’t have to keep focusing on these issues of segregation. Israel is heading down a slippery slope the more they listen to these screwed up individuals. I say that the Charedim are going to ruin Israel from the inside out and this segregation thing needs to be stopped before it becomes a Jewish Saudi Arabia. Only a screwed up frummy website would view such a thing as a kiddush Hashem.

Let’s see Haaretz, Ynet, or some other anti-charedi news outlet report this story”

50 comments for “Charedi Bus segregation is a chillul Hashem”