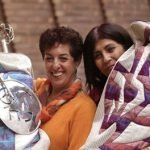 Halachipedia.com was such a good idea when it was conceived that the founder failed to recognize the machlokes they were creating. Driven by pure goodwill and no monetary gain they slaved over the site until it was complete and waited for fellow frum Jews to edit the site and make it into the best frum invention since the shabbos toothbrush. At first, fellow talmudists, friends of the founders and other ehrliche yidden trickled in, but then disaster struck, in the form of one fairly knowledgeable bochur from Yeshivas Choyvivei Toirah. This fellow decided to add a section about Hilchos Nashim that defied the founders wishes and created a machlokes too big for such a frum site as Halachipedia.com.

Who could argue with the fact that no posek had ever approached the subject of women being rabbis, no one had done so because it was simply so outlandish that even the Conservative movement hadn’t thought of it until recently, kal vachomer no Posek would even approach it and so no sources to debate the yeshiva bochur were offered and the edit wars began.

It didn’t stop there, suddenly those who held of The Tur over The Beis Yosef or those who followed the Kitzur Shulchan Aruch rather than the Mishna Brura and Chayei Adam. This goes without entering the Chassidim, Lubavitchers and Sephardim that entered in the mix to prove that a site like Halachapedia.com was either ahead of its time or could not function in a community that couldn’t agree on the interpretation and explanation of a book which everyone held was true. The mesorah may have existed in the founders minds, but no one could actually agree on what the mesorah was and it was giving the Atheists, Humanists, Off the Derechists and Reformers a lot of amo.