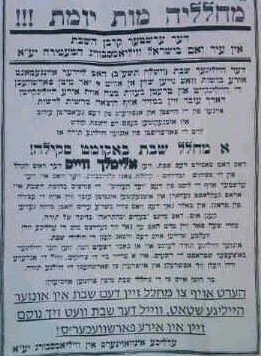 In stead of being decent about death, some assholes (I use such strong language because schschmuck just won’t do for what I’m about to mention) in the Satmar community decided to post fliers declaring that a frum guy struck and killed while walking across the street was killed by God because he used the Williamsburg eruv – which the Satmar community doesn’t hold by.

Now, don’t get me started on how many levels of wrong and assholery this reaches. Sure, we can take the classic route and say that it takes a sad situation and makes it even sadder, but in reality I’m kind of shocked that anyone would do this – so I’m led to believe that there’s some sort of conspiracy involved. As you all know, money makes the world and frum community go round and I’m sure there must be a deeper issue, regardless – I think it’s a pretty shitty thing to do and wonder if we could get them to rethink their ideas of life.

← Confessions of a 612er
How do you go about rejecting a shidduch based on looks? →

15 comments for “Frum A-hole of the week award”