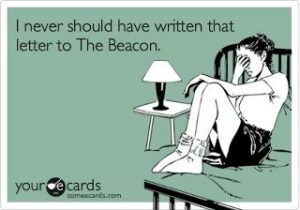 I remember way back in the mid 90’s when the frum community started to awaken to the fact that high school aged kids were leaving the path in droves. At first everyone denied it was happening, but slowly parents admitted to their wayward children and things started to happen. Camps and yeshivas appeared on the scene and at some point frum rehab programs for frum boys and girls suddenly made themselves known, but the off the derech crisis is one of those things that people know think they know how to deal with – premarital sex in the age of the shidduch crisis is not something which could be dealt with, because sex rules and isn’t physically damaging like drugs or alcohol, fact is, sex is good for you. Then again Fox News never talked about the off the derech crisis.

For the record, I think the article was fiction, virgins don’t write like that and who rents a nice hotel room to lose their virginity anymore? That sounds so 1960’s…I myself did the deed in the back seat of my 92 Toyota and according to most of my frum friends, losing your virginity is not planned, it just kind of happens.

So why is premarital sex such a big deal? Loshon Horah, cheating on your taxes and disrespecting your father and elders are much worse than premarital sex which according to my Rav is a much more complicated issue than they told you in yeshiva. Well, sex is one of those things which the frum community has yet to confront, heck, they still don’t want to admit that it’s possible for an outstanding Rebbe like Kolko to have been a sexual offender. How will the frum community deal with the fact that after a certain age in shidduchim, both girls and guys will probably have some sort of sexual activity.

The frum community doesn’t want to acknowledge that their youth are having sex and so that’s why the YU Beacon Article was such a big deal. Even though it’s from a modern orthodox institution, it is still considered orthodox and orthodox boys and girls don’t have sex or at least don’t admit it publicly. It struck a raw nerve and YU and the OU couldn’t deal with it, because it makes their institutions look faulty.

Find out more about Yeshiva University Sex on 4torah.com

35 comments for “Premarital Sex Crisis: Why the YU Beacon article is such a big deal”