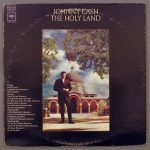 Johnny Cash’s moody, often dark music is matched only by his even more tumultuous life. For years he wrestled with marital infidelity, an addiction to amphetamines and otherdrugs, and attempted suicide.

Then Cash became a born-again Christian, and developed a deep commitment to the Jewish roots of his religion. In 1968 Cash recorded an album of songs and voice recordings, The Holy Land, in which he explores not only the Christian connection to Israel, but the history and spirituality of the land itself. He visited the caves near where the Dead Sea Scrolls were discovered, enthusing to the listener about what happened in that very spot thousands of years ago. While touring the Sea of Galilee, he says, “Israel is really again in its glory, a beautiful place… much greater than she was in the days of King Herod. I’m proud of the Jews of today.”

Five years later, in 1973, Cash returned to film a documentary about the history of Israel called The Gospel Road. But, lest you think that Cash’s connection to Israel and Judaism was entirely spiritual, his son John Carter Cash recalled another of his father’s Jewish connections: on their frequent trips to New York, he would only eat “lox, cheese blintzes, and matzo ball soup.”

← 10 most famous frum streets
Are the Charedim destroying Israel? →

9 comments for “Johnny Cash and the Jews”