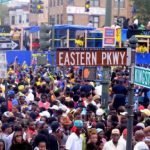 Route 59: (Monsey)This street that runs through Monsey and Spring Valley is filled with frum stores, most notable is the Atrium where half of the Jewish world has gotten married. Getty on the Hill is a gas station which gives you cholent with a fill up on Thursday nights and the 7-11 across the street is filled with cholov yisroel and glatt kosher goodies, Chassidic rebels also like to hang out there and talk with the hatzoloh hockers who frequent there. The Purple Pear is known for its hot underage quasi-off the derech waitresses, but their food sucks.

Central Ave: (Five Towns Long Island)The street that makes Lawrence and Cederhurst into some sort of frum destination is home to a bunch of pizza stores and the only thing of interest is that little alleyway where all the off the derech kids go to get stoned.

13th Avenue: (Boro Park) There is nothing quite like trying to maneuver between triple parked cars on Friday afternoon, throw in multitudes of children, strollers and men scurrying about. 13th ave is a trip because between the heimishe food stores, shietle machers andyeshivish clothing emporiums lie check cashing stores, the occasional ghetto clothing store and that random lingerie store on 47th street or something like that.

Eastern Parkway: (Crown Heights) Take a stroll down Eastern Parkway and watch the neighborhoods gradually change, you start off in the fairly nice section by the museum and slowly degenerate into full blown ghetto, in the midst of this change you begin to see a lot of cute girls and scraggly bearded fellows walking around. At some point you may see a yellow flag or two, but you do notice that the street is wide and beautiful.

Meah Shearim: (Israel) Nothing like a good old shabbos desecration protest at kikar shabbat, unless you forgot to set aside your rocks before shabbos so you could pummel shabbos desecraters. I remember those yummy caramel sufganiyot around this time of year and the various businesses with separate lines or hours for men and women. Don’t forget the signs warning people to respect the neighborhood modesty rules.

Ocean Parkway: (Brooklyn) Ocean Parkway is the reason why there’s no eruv between Flatbush and Boro Park. It also home to some very obnoxious and expensive Syrian homes, I’m sure some ashkis also have these homes, but you can tell the Syrians by the Ferarri’s parked in front and the ashki’s have a lexus. I love watching the old Russians chilling on Ocean Parkway and I hear it’s a great place to pick up ladies on shabbos.

Pico: (Los Angeles) Possibly one of the ugliest famous Jewish streets, Pico is the street and the hood where most of LA’s Jews live. The first time I was there I thought I was in the wrong place because every store had Arabic writing on it, I then found out it was Farsi and that there was a significant Persian population in LA.

Route 42: (Catskills) Famous because it goes from Monticello to Woodbourne going through South Fallsburg and passing by Kiamesha lanes on its way. Watch out for those deer, no it’s just a bunch of chassidim walking on a pitch black road wearing all black. In Woodbourne route 42 is the main street that people from miles around come to hang out, shop, gain weight and play Jewish geography.

Bathhurst Street: (Toronto) The street that goes from the frummer southern community to the less frum, but still pretty frum northern community in Toronto.

41st street: (Miami) I have no idea what’s on it, but it’s the place to be in Miami frum life.

Other not so famous frum streets:

Rechov Penis: I swear there’s a penis street in Jerusalem, I’m not sure if it’s frum, but it’s hella cool.

Ben Yehuda Street: It’s not frum, but it still is kind of frum…

← Are we making Rubashkin into some sort of hero?
Johnny Cash and the Jews →

36 comments for “10 most famous frum streets”