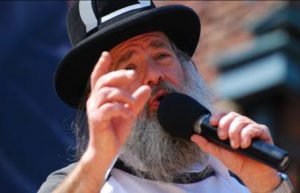 This week’s Torah portion opens with Jacob’s dream, and the verses emphasize that Jacob awoke from his sleep frightened and in surprise.   Rashi explains that it was not the prophetic contents of the dream that startled him, but rather, it was that he suddenly realized he had been sleeping in quite the inappropriate location.

Rashi explains that had Jacob known the significance of the place, he would have slept elsewhere.

What did Jacob mean when he said “yeish Hashem bamakom hazeh,” “God is in this place” — for we seemingly have a b’feirish (explicit) Uncle Moishy song that contests the possibility of this claim:

While a few who cannot really be taken seriously argue that Uncle Moishy and his handlers were being unintentionally provocative by suggesting that God exists in a particular location, or rather, a multitude of locations simultaneously, the vast majority of listeners will take these lyrics, as I think they ought to be taken, as being geared to the young child’s ears in an attempt to convey the message that God is a spiritual entity Who is not in one place anymore or less than any other place — and I think we would all agree that the song would be much worse had it read, “Hashem is not here, Hashem is not there, Hashem is truly nowhere.”  The goal, as I see it, was to assert the ubiquitous nature of the Godly presence rather than imply that God has multiple corporeal forms that each exist in a different location.

The question remains, then, what does the verse mean when it says that “God is in this place?”  If He’s in all places, what is the considerable significance of His being in this place as well?

In doing my research for this post, I came across a five-year-old post at DovBear that elaborates on the liturgical difficulties associated with mention of God existing in one particular location versus another, but these examples (and more) are easily and quite uncontrivedly explained away using non-literal interpretation of the notion that God exists primarily or even ordinarily in the Heavens.  The problem here is that Rashi does not take this route.

Zeroing in on the omniscient narrator’s use of the definite article bamakom (28:11) and, perhaps less authoritatively, Jacob’s own mention of his place of rest as the beis Elokim (“house of the Almighty”) and sha’ar hashamayim (“gate of heaven” — 28:17), Rashi understands that Jacob had, in fact, prophetically selected the future site of the Beis HaMikdash at which to lie down and rest.  Even though the Temple in Jerusalem would not be built on the site for a little over 800 years, such projection of future Jewish practice and observance back into pre-Sinaitic times is consistent with Rashi’s approach of doing so in many other instances, such as maintaining that the patriarchs complied with even the rabbinical enactments of Torah law that itself wouldn’t appear on the scene for another 350 years or so.

As usual, Rashi’s propensity for endorsing the mystical approach is consequent to his general embrace of the Akivan philosophy.  Although R’ Akiva was at first ridiculed for his eyebrow-raising methods of exegesis, his peculiar mode of interpretation soon gathered immense support among the younger generation, and it was soon established doctrine that the law is in accordance with Rabbi Akiva over any of his colleagues unless he is opposed by the majority — but this is all when it comes to halacha.  The views of the R’ Ishmael persisted, despite their relegation to merely influencing Talmudic thought in a somewhat oblique fashion.  As we’ve discussed a number of times before, dibra Torah b’lashon bnei adam (“the Torah speaks in human language”), a tenet of the Ishmaelian school of thought, became a cornerstone of scriptural understanding in aggadic portions of the text, was accepted as authoritative by the Talmud and was further eternalized by the considerable likes of R’ Saadia Gaon and Maimonides.

Moses was confounded by the divine pronouncement, “v’asu li mikdash v’shachanti b’socham,” “let them make Me a sanctuary, that I may dwell among them.” (Exodus 25:8)  How could an infinite God be contained within a finite structure?  In response, though, the verses indeed indicate that the walls were to be constructed, the ark set with its cover, and God would communicate with Moses from atop it between the cherubim.

In the kedusha of the musaf prayer on Shabbos and Yom Tov, we proclaim “m’lo chol ha’aretz k’vodo,” “the entire universe is filled with His glory,” and yet this is immediately tempered with the question, “ayei m’kom k’vodo,” “where is the place of His glory?”  In a sense, then, we see that the hashkafa of contemporary Judaism is really a blend of the two schools of thought.

R’ Ishmael was not particular about the direction of prayer because he would focus on the initial aspect of Moses’ conundrum, and a number of Talmudists were known to abide by this leniency (R’ Sheshes, R’ Hoshaiah), while R’ Akiva did not hesitate to speak concretely about the divine presence, and was known for asserting that God actually descended onto Sinai and that the shechina resides in the west. (Bavli BB 25a)