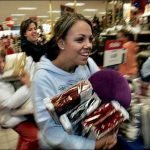 Every year, Black Friday post-Thanksgiving day shopping seems to get larger and larger. I find myself wondering if in 5-10 years from now America will find itself doing ALL of its shopping on that one day for the entire year, shoppers filling parking lots with rented tractor trailers from U-Haul and “hauling” (©1982 by U-Haul® Inc.) their year’s supply of food, clothing, catnip, furniture, real estate, prescription drugs, ear wax removal systems, jewelry, and for the Jews – (WARNING: shameless promotion follows) JUDAICA – from the regional Walmart Ultra-Mega-Giganto-Superstore, all at prices so deeply discounted that no one actually makes a profit and society finally collapses in a ball of flaming mail-in-rebate forms.

Until such a time, here’s my guide to Black Friday shopping, keeping fully in mind that Rav Hutner assured Thanksgiving celebrations as chukas hagoyim. Kevodo munach. I don’t know about Thanksgiving itself, but I’m pretty sure a more reasonable argument could be made that Black Friday can be counted as to’avas hagoyim. Anyway, I’m no posek. Just a feeling…

Black Friday promotions teach us a lot about the intricacies, delicacies, infallibilities, and inanities of the American spirit, most importantly, the art of making mail-in rebates impossible to figure out how to actually send in. Sure, they tell you that all you need to do is fill out a bunch of information on a receipt the size of War and Peace and ship it to store rebate headquarters located in some former communist republic that doesn’t even have a postal system since the Soviet Union collapsed. Assuming rebate headquarters actually gets the rebate receipt and you have indeed filled out all appropriate information including name, address, phone number, date of birth, time of birth, reason of birth, mother’s maiden name’s favorite cereal, and your pet goldfish’s preferred dog food brand, you may actually get your rebate in the form of a check that has to be cashed only during a full solar eclipse (which usually only happen over the Pacific Ocean but that’s just a technicality) and can only be redeemed for Polish currency. Which at this point may be worth more than the dollar anyway, so I guess that’s good.

Assuming you do get your money back from the Pacific, you have probably saved hundreds of dollars on name-brand household items and/or luxury clothing materials, but only if you were wise enough to wake up at 4:00am, arm yourself with a Tazer and some body armor, and drive to the nearest electronics and/or clothing store with nothing but sheer determination fueled by a passion for bargains unparalleled by even the most noble battles for political freedom history has ever known. I, personally, have no doubt that anyone can scrounge up what it takes to shop on Black Friday, so long as he has no regard for his personal safety at all, which is actually quite common.

When first entering, say, the local mall on the day after Thanksgiving, one must immediately and frantically grab on to the first gadget he sees, snarling and foaming at the mouth as he does so, in order to ward off potential gadget-swipers from thinking him nonviolent and thus a potential target for a good swiping. This is why it is recommended that each shopper come equipped with a comfortable complement of Alka Seltzer tablets before attempting to shop. Research has shown that the percentage of gadget swiping is inversely proportional to the volume of foam at the mouth.

Once a gadget is secured and fellow shoppers are sufficiently frightened of you to give you a 2-foot radius of space while they clamor, you can start heading to the checkout lines, because there really is no point in trying to get your hands on more than one appliance. The checkout lines usually begin somewhere between 2 and 7 miles from the store in question. This, historically, is why Thanksgiving dinner is traditionally so large and densely caloric. Shoppers need the extra energy to withstand the grueling checkout lines without literally wasting away into nothingness.

On a personal note, I was able to come out of Thanksgiving weekend shopping last year alive and kicking, with a great new leather jacket made in China out of Honduran sweat-shop children’s pet stray cats to boot. The experience has taught me a lot. For one, even China and Honduras are in on the Thanksgiving madness, which is a good thing. Since China is still communist, I think they have a postal system, which means they’ll probably get the rebate receipts making all of us, consequently filthy rich in Polish currency.

PS, the Polish curreny is the “Zloty”. Now isn’t that HILARIOUS?!!

← Dvar Torah Toldos: Keeping the Faith
My bubbe had balls →