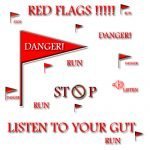 I was just talking with my new GF about my red flags of dating. The biggest one for me is when a girl states that she cannot pee in the woods, if you know me it’s actually not so ironic, but many people find it to be insane. But get this moshel, the girl of my dreams (it’s a moshel because of the girl of my dreams must be able to pee in the woods) and I are on our honeymoon road trip to Alaska and it’s two hundred miles between gas station and she suddenly says she needs to piss like a racehorse and we have to stop at the next bathroom…the sign says the next services are 340 miles away and she’s gotta go). I just don’t want to deal with such scenarios and this is the reason I have red flags. I was thinking of just listing my red flags, but some of them require stories.

Speaking of peeing, I was once on a date with a girl from Washington Heights, we decided to some reason to walk from Midtown to Battery Park and suddenly I had to pee. I figured I would take leave of my date and go behind some bushes so I stated this and she gave me this look that said “you have got to be f#$%ing kidding me” so I refrained. I should have really bounced back with a pretty halachic obligation not to hold in your bathroom needs when you really have to go. Sure, the girl was hot and cool, but the fact she was too formal to allow my lizard drainage without the necessary urinal was a little too high up on the red flag scale.

Older girls who live at home: Another time I went out with this frumster girl from somewhere in Westchester, red flag number one was that she was in her mid to upper 20’s and living at home. The living at home is actually a big red flag for me because (yes I know it’s cheap and the economy sucks) I moved out and supported myself from a young age and I guess I like gals with a show of extreme independence. Unfortunately for me, it;s the norm for frum girls to live at home and my pickiness has squandered my chances at marrying a normal girl so I have started dating converts and baalei teshuva even though their yichus sucks.

Dressing up for dates: I hate dressing up, I generally wear one of three outfits. You can look through close to 5 years of facebook albums and you will notice spandex, bike jerseys, tan shorts, sandals, a few black t-shirts and a red fleece. I haven’t gone clothing shopping in a decade and generally prefer chefs pants to anything else. So when the Westchester girl from the above story about girls living at home insisted that I dress up for the date I was caught off guard. I drove up there in shorts and around the corner from her home (I’m pretty positive someone must have called the neighborhood watch on the dude changing in the middle of the street) I hopped into my black pants and purple shabbos shirt. I already hated this girl and I wasn’t even at the portion where I learned that her parents bought her a brand new car and she wanted an Infiniti and was mildly disappointed at the Honda (if it was now I would have gone Occupy Wall Street on her ass)

No hobbies: During the days when I actually gave Frumster the time of day, I used to skip the entire profile and just read the hobbies section. More often than not, the girls would write hanging out with friends, going shopping and taking care of my niece as their hobbies. Now I don’t mean to knock such pastimes as taking care of your little cousins and I know most frum girls don’t have the means to get into Bikram Yoga, Archery and Slamming Poetry, but can’t you at least set yourself apart from the rest. There was a time in my life that I went out with whom ever came my way (blogging has changed that because women tend to throw themselves at me now) and I remember going out with girls who really had no hobbies, as if they had no interest in anything besides getting married and making more boring frummie babies.

I have no time for fun: I have met and heard about the girls who respond to the question “what do you for fun?” (a red flag in itself because being forced to ask such trivial questions means the girl sucks so much that you have to ask open ended questions to actually elicit some sort of response other than yes or no) with “I have no time for fun” which always brings me to one of my best friends who worked 120 hours a week at one point in his career and still got on his bike, ran several miles, hit up the shooting range and read quite a bit while working what hours no sane person would ever want to, let alone enjoy. It’s not like these girls who were responding that they had no time for fun, were actually doing anything that crazy. They weren’t in residency, working on their dissertations or cycling cross country. They were single girls, mostly living at home going to school or working menial jobs in the frum industries. I always refrained from asking how they would have time for a husband if they had no time for fun. I imagined these girls being the type who never had time for sex either.

Parents supporting them: Basically if you’re 28 years old and your parents support you I want absolutely nothing to do with you. Harsh isn’t it, but I’m that snobby and picky. Fact is I always dated pretty successful (read monetarily successful which doesn’t really cut it for my west coast sensibilities) girls who didn’t need nor want to take money from their parents. But here and there a stray got in, the girl who was somehow able to afford a nice apartment without working and being in school full time. It just got to me a bit, call it the jealousy of my having to grow up in what many people would call working class or struggling financially family and having to make my own way as an adult. But I value fiercely independent women.

About my red flags:

You may have noticed that my red flags are mostly based on money and passion. The funny thing is that in recent years I have gotten away from dating solely outdoorsy girls. I have realized that intellectual capacity and brain power to more valued than outdoors. I figure that when you’re sitting with your wife in the old age home the wit and the mind will be more important than enjoying the same hobbies. Notice how I didn’t say you need comparable hobbies, sure this is a nice thing and I always have a lot in common with the ladies I end up in relationships with, but in general you don’t need to be the same person. I find that the more similar I am to someone the worse we end up.

As I stated before, money is actually a big deal, probably because I have come to terms with the fact I grew up without out and my views on money are that it’s a necessary evil. Marriages mostly break up because of money problems. I think the way people were brought up and their independence on the issue and life in general are an important thing for me. Sure I’m being tongue and cheek, but I am serious about all of the above issues. I even find haskafa to more bendable than money – whenever I get into a relationship I state clearly that I am a frum skeptic and that I have vast existential woes as to validity of Torah and all that stuff I like to shove in back of my head until I pick up a mussar sefer or heretical text.

I find that honesty is best and whenever someone overhears me on the phone with a girl they always say something like “wow you’re really open about stuff” and this to me is the most important lesson I’ve learned through the years. That basically if you BS, you have undermined your entire relationship and it’s built on nothing and will eventually come to bite you in the ass someday.

50 comments for “What are your red flags of dating?”