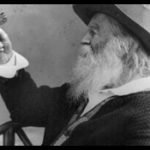 Having so many “friends” on facebook can always make status updates and wall postings interesting. I’m friends with loads of lefties, righties, anarchists, atheists, talmudists, feminists, communists, frummies, baal teshuvas, off the derech peeps and everything in between. Jews are a bickering nation in general, but when you have a Facebook wall like mine it can sometimes get downright violent. Below are some amazing threats of violence based on a simple flirtatious wall post by someone wanting to throw some Whitman at me after having found out I was a big Emerson fan. Someone said it was against the Torah and violent threats ensued.

“This is what you shall do; Love the earth and sun and the animals, despise riches, give alms to every one that asks, stand up for the stupid and crazy, devote your income and labor to others, hate tyrants, argue not concerning God, have patience and indulgence toward the people, take off your hat to nothing known or unknown or to any man or number of men, go freely with powerful uneducated persons and with the young and with the mothers of families, read these leaves in the open air every season of every year of your life, re-examine all you have been told at school or church or in any book, dismiss whatever insults your own soul, and your very flesh shall be a great poem and have the richest fluency not only in its words but in the silent lines of its lips and face and between the lashes of your eyes and in every motion and joint of your body.”
? Walt Whitman

← You will boil in your wasted semen
Facebook, Google and Wikipedia Vs. Electricity →

9 comments for “Quoting Walt Whitman is against the Torah”