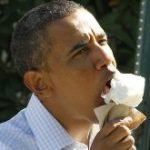 This happened when I was on a little vacay, but in Israel some zealous folks decided to trash an ice cream store in Mea Shearim because that’s what zealots do these days to places they deem unztnius. Seems like everyone is trying to one up each other on how frum they can be by using violence and destruction. I wish the ultra-orthodox would go the way of the Occupy Wall Street crowd and conduct some civil disobedience rallies. Instead of making a chillul Hashem, taking away someone’s livlihood and undermining your religion – try something peaceful.

In all honesty I also find luscious young ladies licking ice cream cones in public to be a terrible breach of tznius, but I would never vandalize a store because I felt so. I would merely avert my eyes, so that my pure mind wasn’t polluted by such pritzus. Of course, you may want to check out the post I wrote about this very topic, way back in 2008, where I told the readers which foods should be banned due to the sexual imagery the yetzer harah forces into our heads when folks eat these items in public. Obviously, these zealots weren’t paying attention. Just another reason to have the internet, sans filters.

It’s only time until those Mea Shearim zealots start burning down fruit stores in protest of all the phallic shaped things they sell. I should mention that the ice cream store in mention, actually had signs asking people not to lick their rapidly melting ice cream cones in public and that there were separate mens and women’s lines in the store.

32 comments for “Licking ice cream cones in public is unztnius”