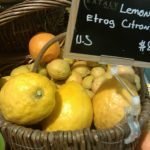 Irreligious liberal Jews are up in arms over the fact that most of the arba minim being used for succos are not grown organically or sustainably, they are a plight upon the land and doing a mitzvah with something that is not grown properly is really more of a sin than not doing it all. In Israel the organic, sustainably grown, fair trade, heirloom esrog movement has already begun to take place. Farmers, in a similar vein to the one’s who keep shmitta, have already gotten seals of approval from Hechsher Tzedek for complying with this very important chumra.

As can be expected, Charedim and other so called “Torah true Jews” are up in arms about this, they say that it’s unnecessary chumra that undermines authentic Judaism by placing importance by things not mentioned in the Torah or even shulchan aruch. “Chumras whicbh have no halachic basis, have no business being spoken of” according to one leading Charedi zealot – when question about the halachic basis of beating up women who sat in the front of mehadrin buses – he turned on his heels and walked away.

One would think someone as frum and right wing as myself would be shocked over such communist-liberal-Jew-ish agendas, but since moving to San Francisco I have experienced things such as the Lesbian Yoga Shachris and the wilderness b’nai mitzvah – so it’s not really all that shocking, in fact I’m shocked that it’s taken this long to realize that there’s a market for organic esrogim and lulavim and that someone who doesn’t even keep the Torah was going to try and tell us that it’s demanded of us to keep some crazy liberal chumra.

There are even some shuls who have boycotted Israeli arba minim in protest of the ongoing Palestinian oppression.

search for organic esrogim on 4torah.com