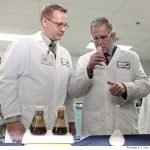 This is an experiment….tonight I’ve been having a conversation with old friends about a lot of random topics and I wanted to see if I could just put them on paper.Soc much more was said, but like all good conversations it’s a slightly distant memory that’s being drowned out by this ever decreasing bottle of 04 Ella Valley ever red – really good on the front end, but lackluster in its finish and not very bold.

You guys got any wine here?

“There’s a stack of wine over there”

“Yeh we drink the red”

You know the first time I came here I brought a bottle, immediately you placed it on top of this heaping stack of wine and didn’t touch it all shabbos – never brought a bottle again.

“You into wine or something”

It’s strange, I never knew I was getting into wine, I just went to all these meals in the Bay Area where they would have good wine and I was somewhere on Pesach and they had Barkan Classic and it literally tasted like wine from concentrate – like they added 50% water or something. No one else noticed the water and I finally realized that I could only drink big and bold wines.

“I don’t even know what you just said”

You have any wine glasses?

“In there on the left”

Dude, these are martini glasses….I guess they will do.

“Where’d you daven up there?”

All over, but I was in Beth Shalom yesterday and I got lost in their library – I’m always fascinated with the libraries in modern orthodox shuls. They are full of books that no one has looked at in 30 years – I read most of this book on Leo Jung – he was the rabbi of the Jewish Center in NY for like 80 years, fascinating.

Ironically or not I’ve been getting into those Rebbe/Gadol biographies that are all made up by Artscroll. Must have read the Reb Yaakov one 15 times in shul.

“The Reb Yaakov one is really good”

Yeh I’m kind of addicted to the pre-war gedolim who visited or settled in America, they seem so much more open minded than nowadays gedolim. I’m also into all that Lammm Hirsch and Solevatchik stuff.

“Hey, hesh – why don’t you interview Sara Huriwtz? I can give you a list of really complex niddah shayalas to ask her and we’ll see if she knows her stuff…”

Sounds like fun, but I’m not sure she would want to be interviewed by a nut like me, I may lose it you know.

“You’re pro woman rabbi or what?”

“The point of Hurwitz was supposed to be for niddah stuff, at least from what I hear.”

Imagine the lady brings in her stained underwear to the Rav and he says “hey my wife has the same one’s – sale rack at Old Navy right?” and then of course the Rabbis wife says – hey nice stains…I guess the whole Rabbi examining underwear thing would be pretty embarrassing.

You k now I just did a video about why Chabad is chassidic but not Chassidish?

Also heard they still don’t know what the Rebbe worked on in the Brooklyn Navy Yards…some top secret stuff.

Well he never worked on the Verazano bridge, but he did work in the Navy Yard.

“So Hesh you got the BS shidduch story wrong, but let me tell you a really good story”

“This girl I know was on a shidduch date with a guy and he starts tapping his foot. She says dude, why you tapping your foot? He says his foot fell asleep and she responds that it smells like his foot died.”

Who cares, what’s her name? 14 mutual friends on Facebook, oh she’s wearing red and she’s got mountains in the back round, wiat why’s she friends with Bay Area peeps? Hmm…

So you guys don’t clop your chests at Illsons?

I’m telling you, these Gra-nicks are a strange breed – you don’t say kabalas shabbos either right?

“So what’s the deal with dating?”

“What happened with the last girl?”

Not for me. I’ll date 25-35 year olds. I’m thinking that it’s high time for me to date an FFB – the last bunch of lady friends have beet baalas teshuvas, gioreses and more secular leaning. Maybe I can find someone who grew up frummy, went off the derech and decided to come back to orthodoxy on her own terms. That means they understand the frummies, secular and BT’s – sounds perfect.

“Actually my friend one time had some dude come up to him and say – heard you don’t have a father in law, don’t worry my parents are dead too.”

Even I have more couth than to say such a thing.

Post conversation thoughts: The problem with staying at the Rabbis house is that you get roused for shul. I haven’t actually said hallel with a minyan yet, I wonder if my lulav shaking will be up to par – all I’ve done so far is Hoshanos – I wonder if Freud ever wrote about that one.

Search for succos on 4torah.com

← Haven’t we learned anything from Rubashkin
Could Jonathan Pollard Be Released? →

4 comments for “Strange and random conversation”